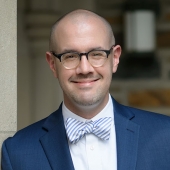 In addition to his role at the Chapel, Dr. Highben is an associate professor of the practice of church music at Duke Divinity School.

Prior to his appointment at the Chapel in 2019, Dr. Highben was associate professor of music at Muskingum University and director of music at Trinity United Methodist Church in Columbus, Ohio. Choirs under Highben’s leadership have performed at numerous choral conferences and festivals, and have toured domestically and internationally. In 2015, he won The American Prize in Conducting in the College/University Chorus Division for his work with the Muskingum choirs. In 2016, he was selected as the Central Division Fellow for the American Choral Directors Association’s International Conductors Exchange Program with South Korea.

Dr. Highben has taught courses and given lectures on topics such as choral literature, conducting, rehearsal techniques, and the musical heritage of the Reformation. His scholarly output includes two sacred choral anthologies, numerous articles and essays on the practice of church music, and more than fifty published choral and liturgical compositions.

Dr. Highben earned an undergraduate degree in music education from Ohio State University, a master of sacred music degree from Luther Seminary with St. Olaf College, and a doctor of musical arts in conducting from Michigan State University. He is an ordained deacon in the Evangelical Lutheran Church in America.