The mission of Duke Chapel is "bridging faith and learning." See what that looks like in the lives of these students by watching or reading these profiles of their faith-and-learing experiences at Duke and with the Chapel.

Singing as a Language for God

The Rev. Camille Loomis Rehnborg, D ’20, came to Duke Divinity School so that she could sing to God in Duke Chapel services in addition to studying about God in theology classes. A member of the Duke Evensong Singers while at Duke, Rehnborg regularly sang with the group in Choral Evensong worship services. “Music has always been my first language to speak to God,” she says in this faith-and-learning video. Now serving as the minister of spiritual formation and outreach at First Baptist Church in Greenville, South Carolina, Rehnborg says, “I learned the Bible through Evensong Singers—I’ve read the Bible, but I lived and studied scripture because I was studying it for the musical presentation.”

Discerning What Healing Work to Do

Caroline Gamard, T '22, came to a Duke Chapel service as a freshman but didn't think she would come back until she discovered a faith community through the Chapel Scholars program and also with the Duke Episcopal Center. Having begun a major in chemistry, when the pandemic hit, Gamard was left with lots of time to ponder her purpose in life.

"That's where the Chapel and where these faith communities really came into play," she says about conversations she had with Chapel and Episcopal Center ministers. "One of the reasons I was originally in chemistry was that I wanted to go into pharmacology and drug design because I was really drawn to this idea of healing through making better drugs, but I realized I really wanted to be part of that healing process with people one-on-one."

"All of the that helped me figure out that I really wanted to a psychologist and work in mental health care," she says. "One thing that I want to do in my work is open these spaces for people to come exactly as they are and be authentic and be validated, and I feel like I learned about those spaces by occupying them at the Episcopal Center, at the Chapel."

Now majoring in psychology, the senior from Fairhope, Alabama, says, "This was my life speaking to me; this was God telling me, 'This who I made you to be.'"

A Senior's Deepening Understanding of Faith and Healing

As a double major in biology and classical languages, Jonathan Avendano, T ’21, is deepening his understanding of the connections between faith and healing. “Everything that I am about is trying to see how our Christian faith, how the values of caring for the poor and needy, how we deal with pain, how we deal with suffering—how all of that plays into the medical profession and how that plays into ministry,” says Avendano, who is involved at the Chapel as a choir member, Dean’s Scholar, and Chapel Scholar. Read the full profile. 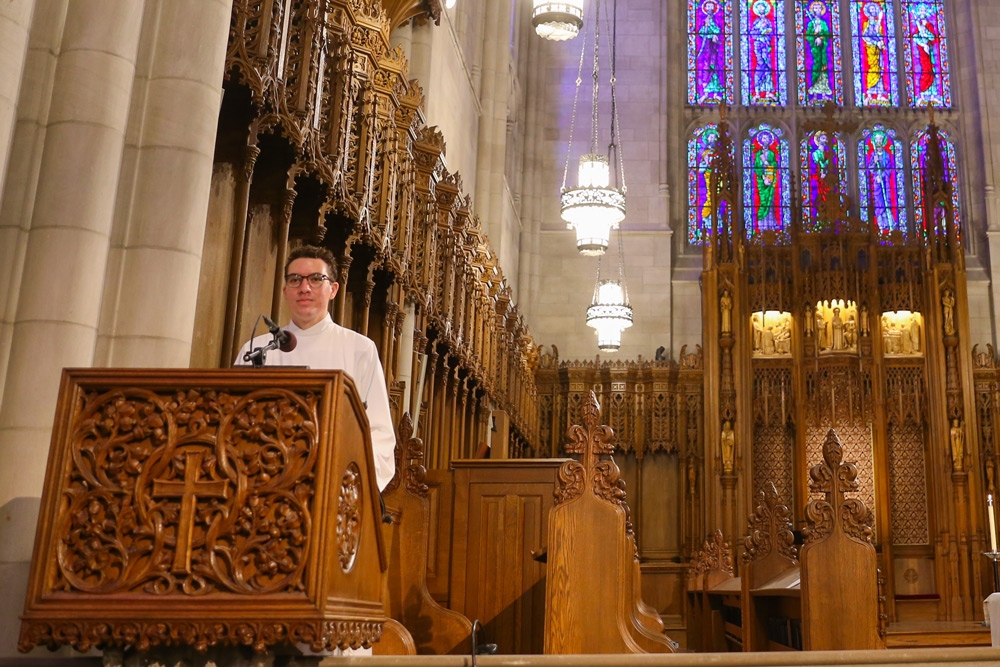 A Religion Major Discusses Faith Inside and Outside of Class

As a double major in religion and African American studies, Tatayana Richardson, T ’21, finds that her academic work blends into her personal and public conversations. “I often encounter topics in the classroom that I am able to discuss, research, and unpack outside of the classroom whether through my Chronicle column, in conversation with members of Duke Wesley, or simply through personal research and reading,” says Richardson, a Duke Chapel Scholar from Atlanta, Georgia, who is also a member of Peer Advising and the Zeta Phi Beta Sorority. “I have also been able to make my faith and learning intersect in developing a deep interest in Black Theology, going so far as to base my senior thesis on it.” Read the full profile. 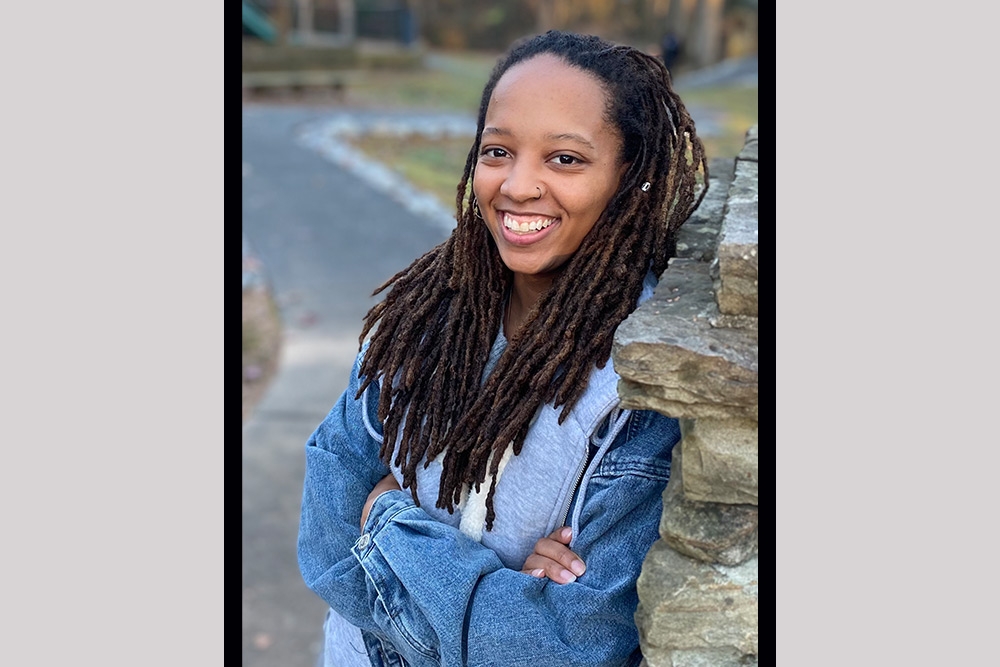 A Science Major Who Grows in Faith Through Bible Study

For Jordyn Blake, T ’21, a Chapel Scholar and neuroscience major, the coronavirus pandemic has, out of necessity, deepened her faith. Studying the Bible is a key spiritual practice for Blake, who is president of the student gospel group United in Praise and part of the Religious Life group Every Nation Campus. “God allowed me to see that through this pandemic; although our world is suffering, His power and love is still evident,” says Blake, who does biomedical engineering research at Duke’s Center for Global Women’s Health Technologies and is a teaching assistant in the Department of Computer Science. Read the full profile. 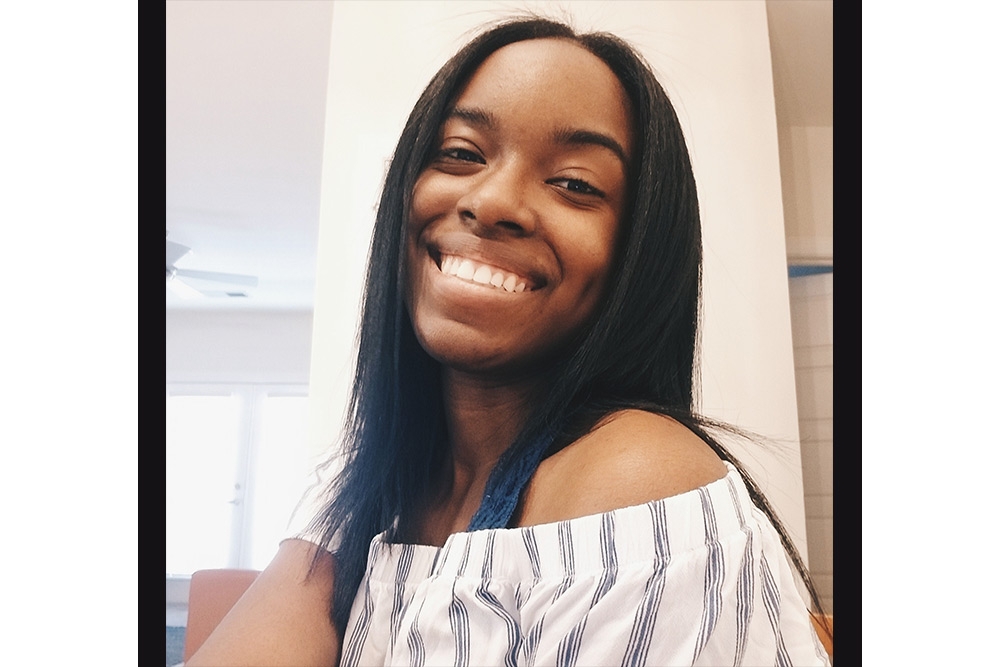 Faith and Music Provide a Foundation in Uncertain Times

For Grace Jeffrey, T ’21, her faith has given her both comfort and direction while at Duke and during the coronavirus pandemic. “My faith has definitely motivated my goals and aspirations, as I feel called to pursue a career and life that is centered around helping others,” she says about her faith that was shaped by her family and her hometown church Nimmo United Methodist in Virginia Beach. “My faith also helps alleviate any worries I face—from schoolwork to the job search, I’m always confident that God will provide.” Read the full profile. 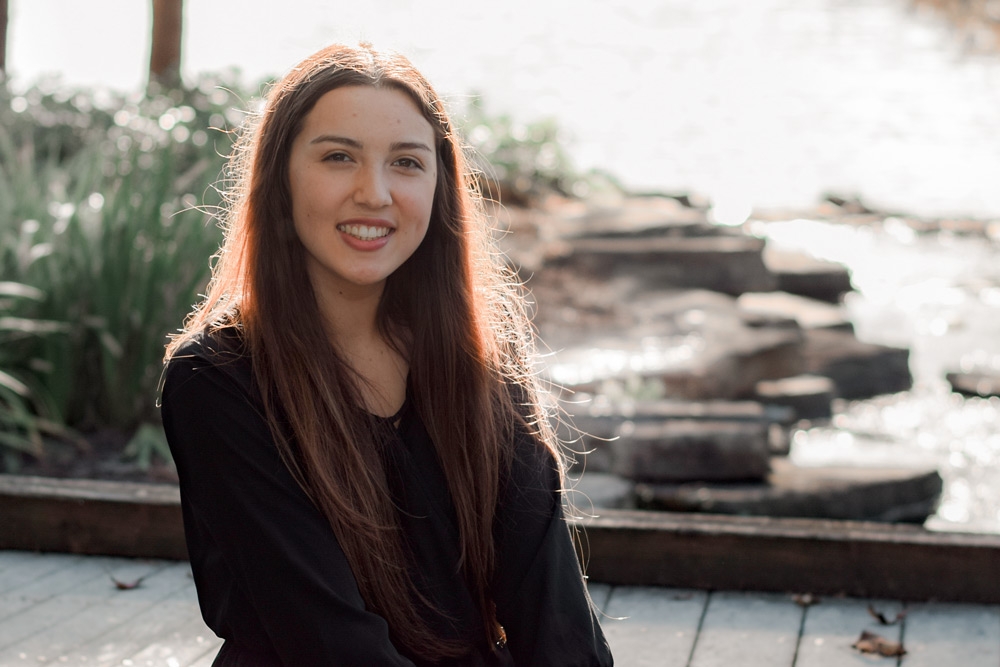 Faith as a Foundation for Worship, Inquiry, and Service

When Eyram Klu, T ’19, arrived at Duke as a freshman, the Chapel was closed for renovations, so he didn’t get to go in the building, but he said, “The Chapel community was still very present.” An in international comparative studies major, Klu immersed himself in the Chapel community, becoming a Chapel Scholar, attending Chapel services, and taking leadership roles in worship. Raised in the Presbyterian church, Klu found support for his Christian faith in the Chapel’s Framing Your Faith program, the Every Nation Campus Ministry, and the United in Praise student gospel group. At Duke, he said his faith has not only been affirmed but also deepened by questioning it.

As a double-major in English and African American studies, Liddy Grantland, T ’20, spends a lot of time carefully reading books. A Chapel Scholar and National Advisory Board member, she also pays attention to the people in her faith communities. “I believe that paying attention is a practice of loving,” she says, "and that when we pay attention to something, we are loving it.”

Coming to Duke, Usamah Chaudhary, T ’20, found a vibrant and diverse Muslim community on campus. In addition to becoming a leader in the Muslim Students Association, he also became president of Duke Voices for Interfaith Action, a student group advised by Duke Chapel that creates opportunities for dialogue and service among students of different faiths. As a biology and computer science major who plans to study medicine, Usamah says his classes are showing him how he can help people but his faith helps him understand why it is important to help others.

Jonathan Osei, T '18 , was first drawn to Duke Chapel because of its preaching. Through the Chapel Scholars program, Jonathan began to learn about, and serve in, the Durham community. In his Public Policy courses he made connections between community policies and his faith. Upon graduating, Jonathan will continue to serve in Durham and deepen his faith through the Duke’s PathWays Fellows program.

As a first-year student from Orlando, Florida, Elizabeth Barahona, T '18, found a supportive and faithful community at Duke Chapel. During her time at Duke, she has grown as a community organizer by teaching a student-led Chapel house course on the ethics of mission trips, and also taking a leadership role in the Duke's Latinx student association Mi Gente. Studying history, Latino studies, and human rights, Elizabeth aims to continue strengthening her communities after she graduates by advocating for immigrants.

Music as a Gift

As a member of Duke Chapel’s Vespers Ensemble, Xiating “Ting” Chen, E '17, came to the Chapel twice a week to sing. Also a Chapel Scholar and a member of the Duke Presbyterian Campus Ministry, Ting said the Chapel's weekly Vespers worship services played an important part in her life of faith at Duke. She majored in music and environmental engineering and said that her experience with the Chapel helped her understand music not only as a subject to be studied but also a gift from God.

As a classics major Zach Heater, T '17, critically studied biblical texts—and he also engaged those same texts as a Scripture reader in Duke Chapel worship services. A Chapel Scholar and Duke Wesley Fellowship member, Zach said that he was driven to keeping asking questions of the texts but also found that, “We belong to God whether we have answers to questions or not.”