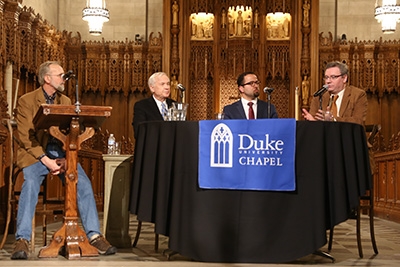 When Willimon took his Sabbatical leave during the 1995-96 academic year, the Rev. Debra Brazzel, a United Methodist, served as the Acting Dean of Duke Chapel.

Young was given the title Minister to the University per a 1972 campus committee recommendation. When he resigned in 1983, he received the title Dean of the Chapel.

Barney L. Jones, Methodist, Chaplain to the University and Director of Religious Life

James H. Phillips, Methodist, Chaplain to the University and Director of Religious Life

In 1950-51, Phillips was appointed the first Chaplain to the University. His administrative responsibilities encompassed both religious activities on campus as well as all Chapel services.

The Administrative Committee of Duke Chapel

In 1948, then-Dean of the Chapel Franklin S. Hickman proposed that the title itself be abolished, due to budgetary constraints and a reduction in the Chapel’s administrative functions. Hickman received approval to form an administrative committee that  would assume the Dean’s duties. From 1948-1950, the committee consisted of Hickman, James T. Cleland and Dr. Harold Bosley, a Methodist, all of whom were given the title Preacher to the University. Hickman and Cleland continued to serve in that capacity until 1952, when Hickman took a sabbatical leave.

Although he never became the Chapel’s administrative head, Cleland was prominent in the life of the Chapel throughout his career at Duke. Cleland is currently the only former preacher of Duke Chapel whose ashes are interred in the Chapel vault.

With the formation of an interdenominational Congregation approved in 1937, Hickman was officially recommended and named the first Dean of Duke Chapel in 1938.