One April day in 1925, James Buchanan Duke walked through a forest with his friend, William Preston Few, in the hope of finding a suitable site for a new university. Walking away from Durham along a plateau full of pines, gums, hickories, and oaks, Duke paused at the highest point and said: “Here’s where it ought to be.” He decided that the Chapel should stand at the center of the university. “I want the central building to be a great towering church which will dominate all of the surrounding buildings, because such an edifice would be bound to have a profound influence on the spiritual life of the young men and women who come here,” he said. Among the buildings of West Campus, Duke University Chapel was the first to be planned and the last to be built. The cornerstone was laid on October 22, 1930, but construction continued for the next two years. Students often gathered near the huts of the stone carvers that occupied the land directly behind the construction site; they enjoyed watching the Chapel rise higher and higher. The Chapel was first used for Commencement in 1932 and was formally dedicated on June 2, 1935. In 2015-16, Duke University invested $19.2 million in a significant restoration of the Chapel.

Jump to a section 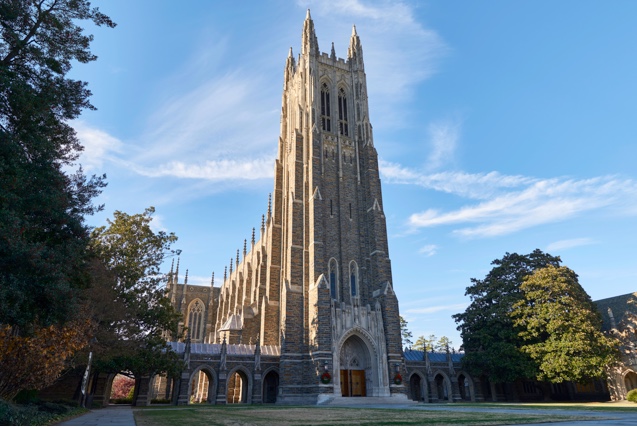 The architectural style of the Chapel is inspired by English Gothic and represents one of the last great collegiate Gothic projects in this country. The chief designer of the Chapel was Julian Abele, a prominent African-American architect in the firm of Horace Trumbauer in Philadelphia. A plaque in the Chapel’s narthex honors his architectural legacy at Duke and elsewhere. The stone carving in the Chapel was sculpted by John Donnelly, Inc., of New York. All of the woodwork was fashioned by Irving and Casson, A. H. Davenport, Inc., of Boston, and designer Charles H. Crowther. The 77 stained-glass windows and the ornamental lead-and-gold symbols in the doors were designed and made by G. Owen Bonawit, Inc., of New York, along with designer S. Charles Jaekle and craftsman Hugh Doherty. Charles Keck, of New York, sculpted the recumbent statues on the tombs in the Memorial Chapel. The ironwork was hewn by the William H. Jackson Company of New York. 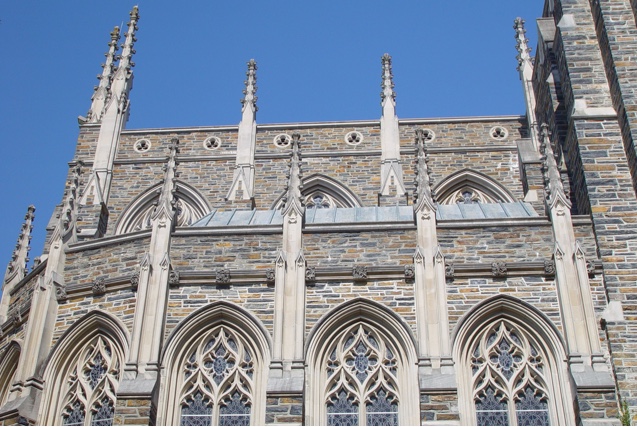 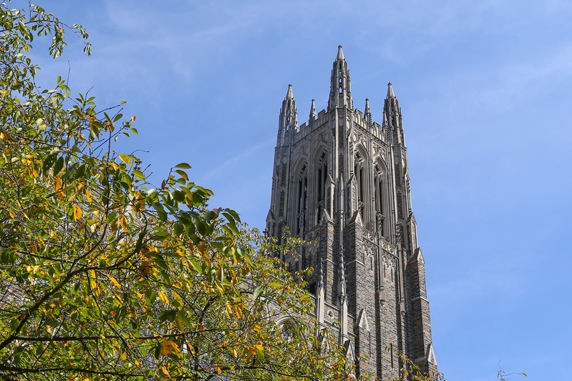 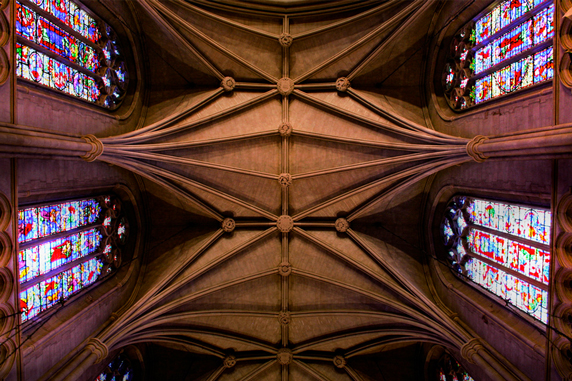 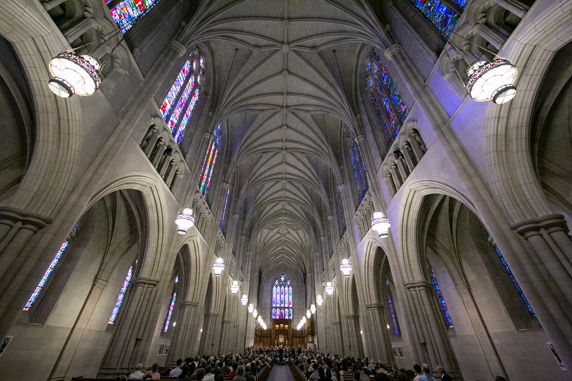 Members of the Duke family were devout Methodists. Although Duke Chapel is not a Methodist church, above the portal are sculptures of those who helped advance the American Methodist movement. The Thomas Coke meant to be depicted was actually a heavy, clean-shaven man who wore clerical garb. It is believed the sculptor accidentally used a depiction of British judge Lord Chief Justice Edward Coke as his model, so the statue is of a thin man in a hat with a beard. 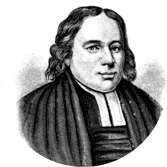 English Methodist missionary and bishop of the Methodist Episcopal Church

Pioneer Methodist preacher and bishop of the Methodist Episcopal Church 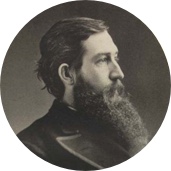 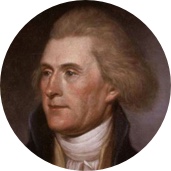 On August 19, 2017, the university removed one of the three statues on the right side of the main entrance portal. The original sculpture of Robert E. Lee had been recently vandalized amid growing national tensions after the tragic events in Charlottesville, VA, earlier that summer. The university then conducted a year-long process to explore the many different facets of memory and history at Duke. On August 16, 2018, Duke President Vincent Price, with full support from the Board of Trustees, announced that the university would leave the space empty as a reminder of our need to reflect on "how the reality and symbols of our past continue to shape our present."

The Chapel’s seventy-seven windows depict biblical characters and stories. The clerestory (upper) windows of the nave and chancel are devoted to the Hebrew Scriptures. The twelve medallion (lower) windows of the aisles illustrate the Christian Scriptures’ New Testament stories. The two large transept windows and the great altar window contain prominent figures from the Bible. The number of figures in the windows totals between 800 and 900, and there are 301 larger than life-size figures. More than one million pieces of glass, varying in thickness were used to create the windows. The primary colors are yellow, ruby red, and blue; other colors are brown, white, purple, and green. The glass is stained all the way through using a technique called “pot metal glass,” which makes for rich colors. Different colors of glass come from different countries, including Belgium, England, France, and the United States. S. Charles Jaekle of G. Owen Bonawit, Inc., in New York, along with fourteen other artists and craftsmen, designed and composed the windows. It took them almost three years to complete the project. 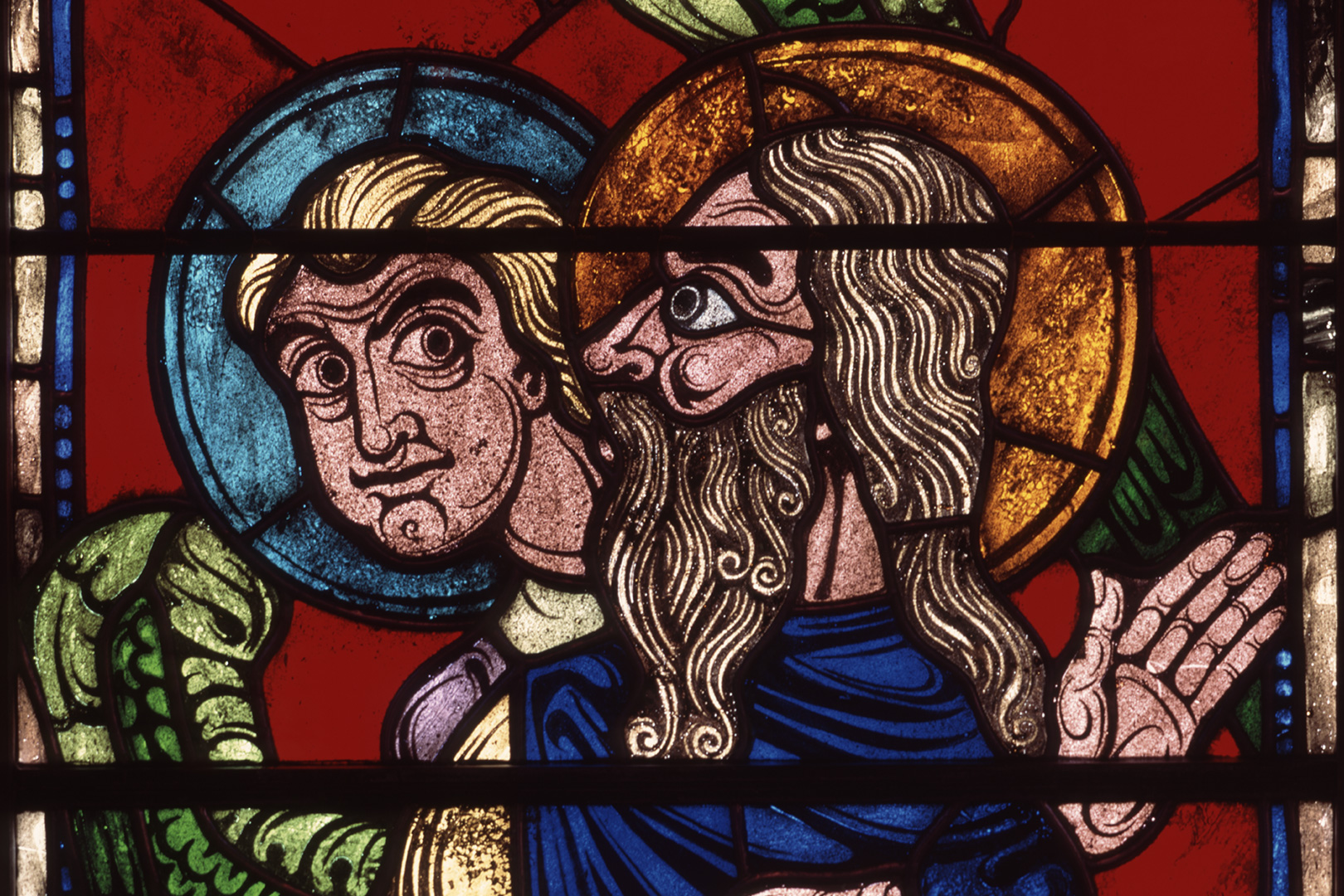 Tobit with Tobias and Raphael 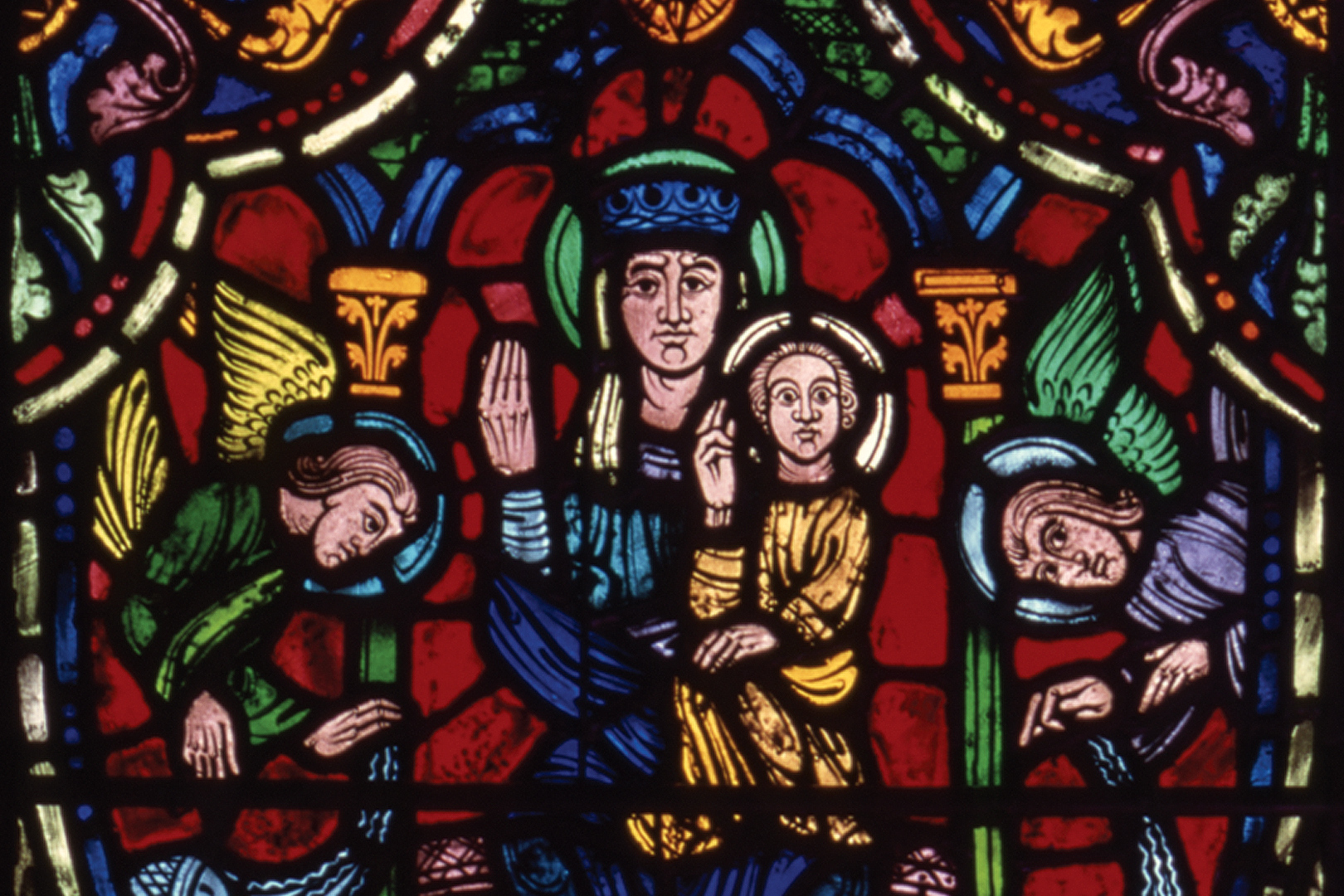 The Virgin with Child 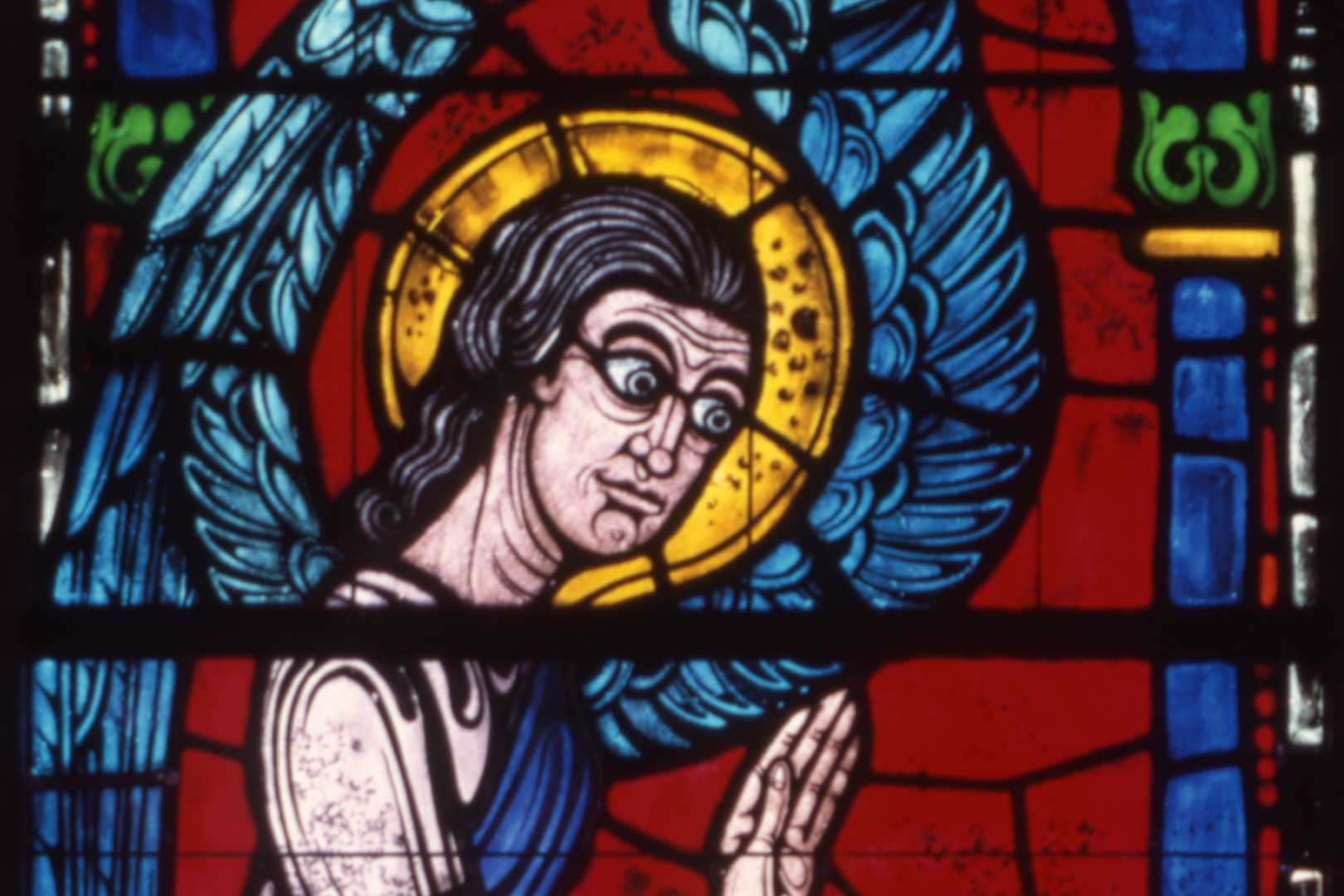 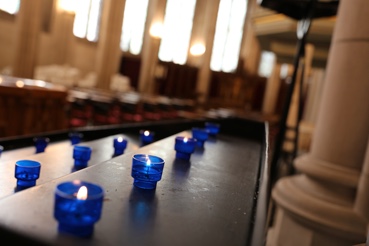 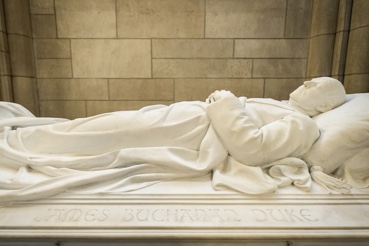 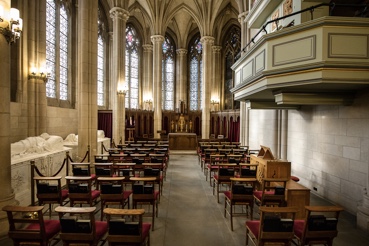 To the left of the chancel and behind the iron gates is the Memorial Chapel. On the altar are three limewood figures: St. Paul, Jesus, and St. Peter. Entombed in the Memorial Chapel are the benefactors for whom the University is named, Washington Duke and his two sons, Benjamin N. Duke and James B. Duke. The sarcophagi and the Memorial Chapel were gifts of the Duke Memorial Association. Organized in 1928 by James A. Thomas, the association received contributions from friends of the Dukes all over the world. On the ceiling in the Memorial Chapel, a boss (ornamental ceiling stone) with the Duke family coat of arms can be found. There are also plaques on the wall honoring philanthropists Doris Duke, daughter of James B. Duke, and Mary Duke Biddle Trent Semans, granddaughter of Benjamin N. Duke and also a Duke University graduate and trustee. The windows of the Memorial Chapel are made of silvery tinted glass, a technique called grisaille, and the windows of the crypt are composed of purple glass and lead grilles. 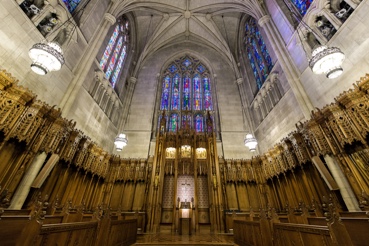 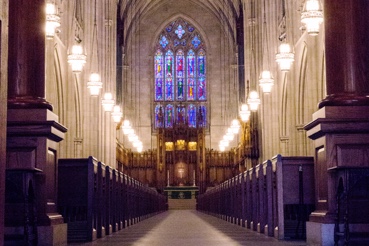 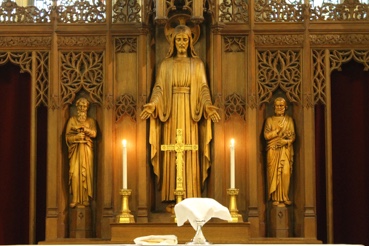 Limewood and oak figures of biblical patriarchs, apostles, and saints appear in the niches of the oak choir stalls and in the ornamental screen behind the altar. Symbols from the Passion of Jesus are carved on the north and south walls. 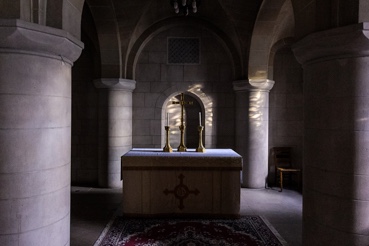 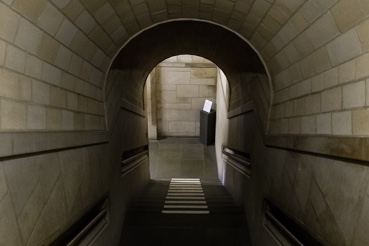 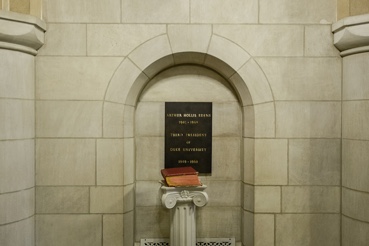 Duke University Chapel is home to three outstanding pipe organs—each in a different style—that are used regularly for worship services, concerts, and teaching. A fourth organ is a movable “positive” instrument for accompanying smaller ensembles. The organs can be heard weekly in Sunday worship services, and also at weddings and funerals. In addition, the Chapel sponsors a free organ recital series featuring some of the world’s premier organists. 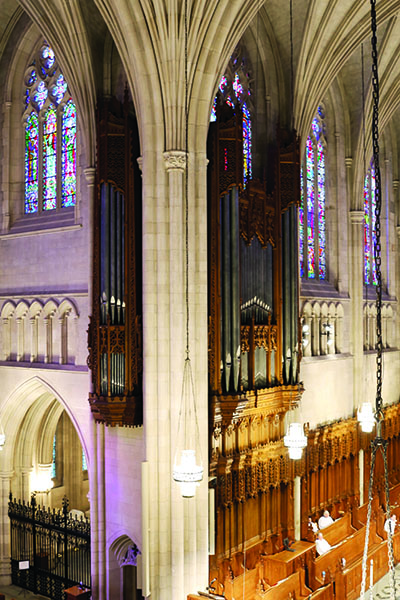 The Kathleen Upton Byrns McClendon Organ is the Chapel’s original organ, installed in 1932 and reconditioned in 2007-08. This remarkable instrument, the last major organ produced by the Aeolian Organ Company (New York) before it merged with the E. M. Skinner Organ Company, is the firm’s only significant organ built for a church. Designed in the late Romantic Anglo-American tradition, the organ is known for its extremes of dynamic expression and the orchestral voicing of its individual stops. The visible pipes only hint at the Aeolian’s size; approximately 6,900 pipes are located in deep chambers behind elaborately carved oak screens on both sides of the choir and in the transepts. The organ is played from a four-manual-and-pedal console located in the choir stalls on the left. 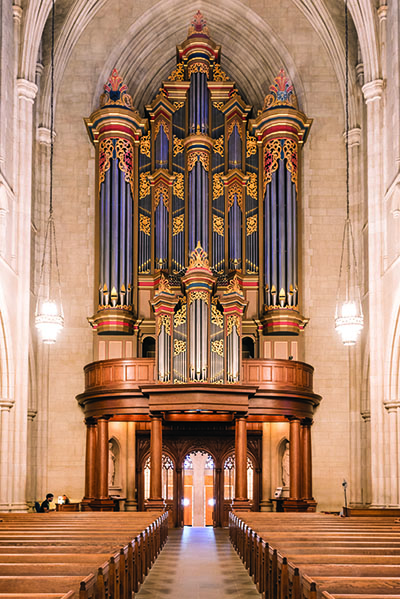 The Benjamin N. Duke Memorial Organ, constructed by Flentrop Orgelbouw (Holland) and dedicated in 1976, is located toward the Chapel's front entrance in the great arch separating the narthex and the nave. This mechanical action organ, conceived in late Baroque style, contains more than 5,000 speaking pipes controlled by four manual keyboards and a pedalboard. The imposing main case, about 40 feet high but less than five feet deep, is made of solid mahogany and painted in various hues accented by gold leaf. One of the instrument's five divisions is housed in a separate case on the gallery rail, hiding the keyboards from view. Both tonally and visually, the magnificent Flentrop organ reflects the ethos of 18th-century Dutch and French organs. When Duke Chapel was first built, its acoustics were deliberately deadened for clarity of speech by using sound-absorbing Guastavino tile. At Dirk Flentrop’s insistence some forty years later, the acoustics of the Chapel were altered to provide an acceptable environment for the new organ before it was installed. The absorptive tile was coated with a sealant to increase the reverberation time, and a time-delay sound system was installed to accommodate the spoken word. 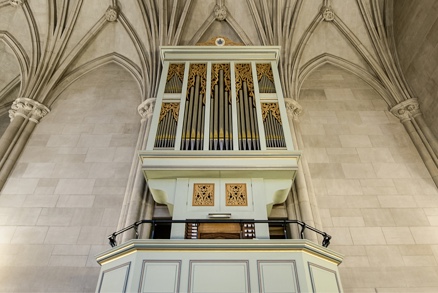 Located in a “swallow’s nest” gallery, the Brombaugh organ (1997) in the Memorial Chapel is modeled after late Renaissance Italian instruments. Expanded somewhat to accommodate other schools of organ literature as well as service music, this two-manual-and-pedal organ of 960 pipes produces gentle, sparkling tones on very low wind pressure. The organ is tuned in meantone temperament (with 14 notes per octave, offering choices of D-sharp/E-flat and G-sharp/A-flat), the tuning system preferred for most organs in the 16th and 17th centuries. The carved pipe shades are made from Appalachian oak, and the top of the richly polychromed case is adorned with the Duke family crest. 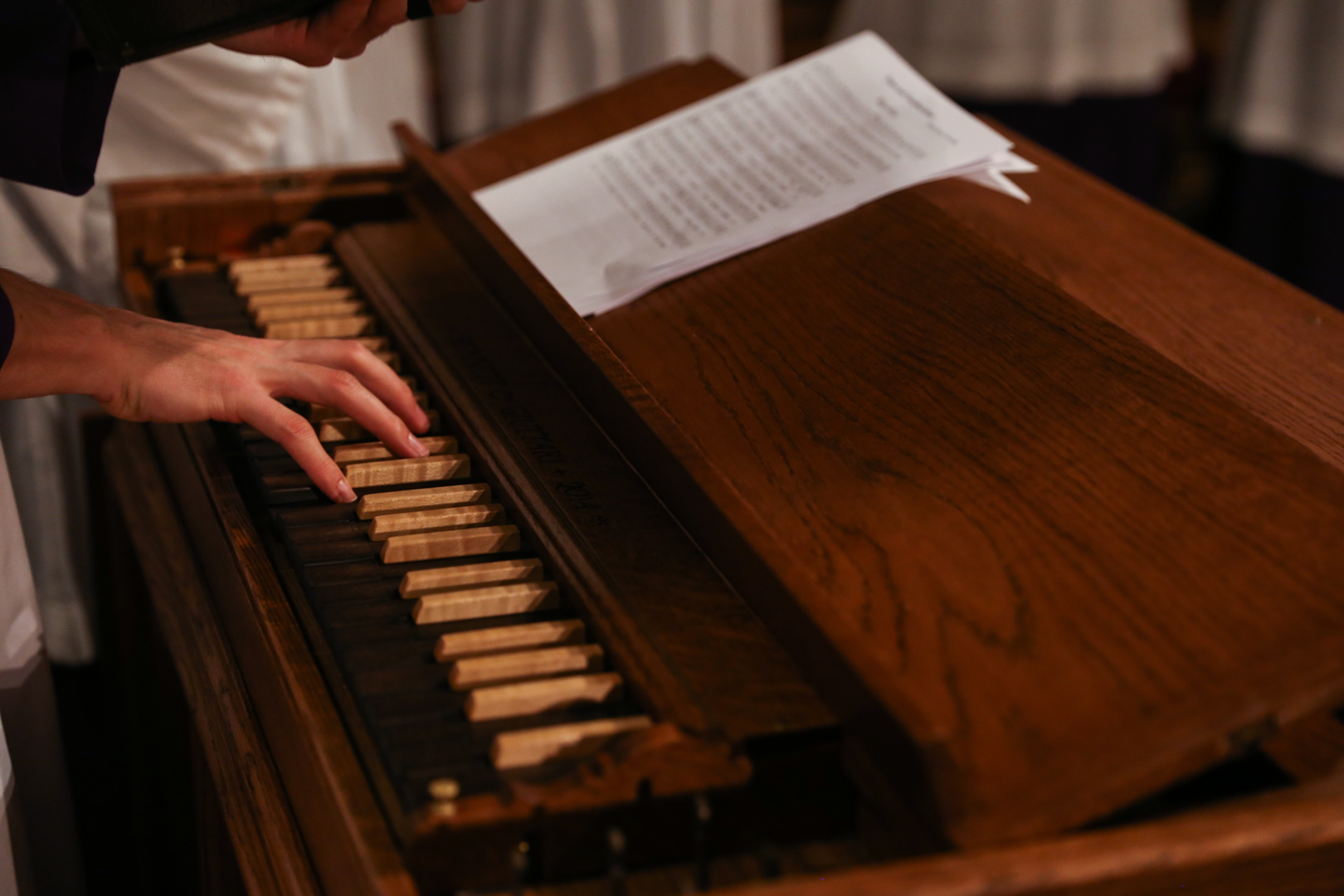 This diminutive single-manual instrument by Bennett and Giuttari (2014) is based on a 17th-century German Kistenorgel (box organ), and is used primarily with small choirs and instrumental ensembles. Although it usually resides in the chancel, the organ is portable and can be moved to other parts of the Chapel for services and concerts. All of its 153 pipes are made of wood and fit within the white oak case.

Inside the Chapel tower is a fifty-bell carillon. The carillon was a surprise gift promised in 1930 by George G. Allen and William R. Perkins of the Duke Endowment, made in honor of James B. Duke. Its inaugural recital was in 1932, and 10,000 people attended. The largest bell, G-natural in pitch, weighs 11,200 pounds and measures 6 feet 9 inches at the mouth; the smallest bell weighs 10 1/2 pounds and is 6 3/8 inches in diameter. In 2018, the Duke University Board of Trustees named the carillon in honor of J. Samuel Hammond, University Carillonneur Emeritus, who played the instrument from 1965 to 2018. The carillon is played regularly at 5:00 p.m. on weekdays. 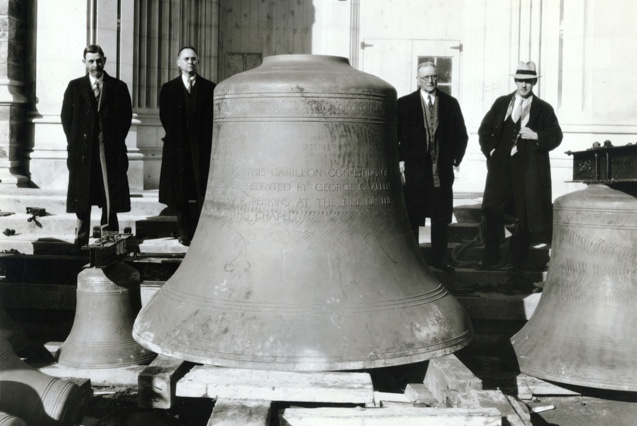 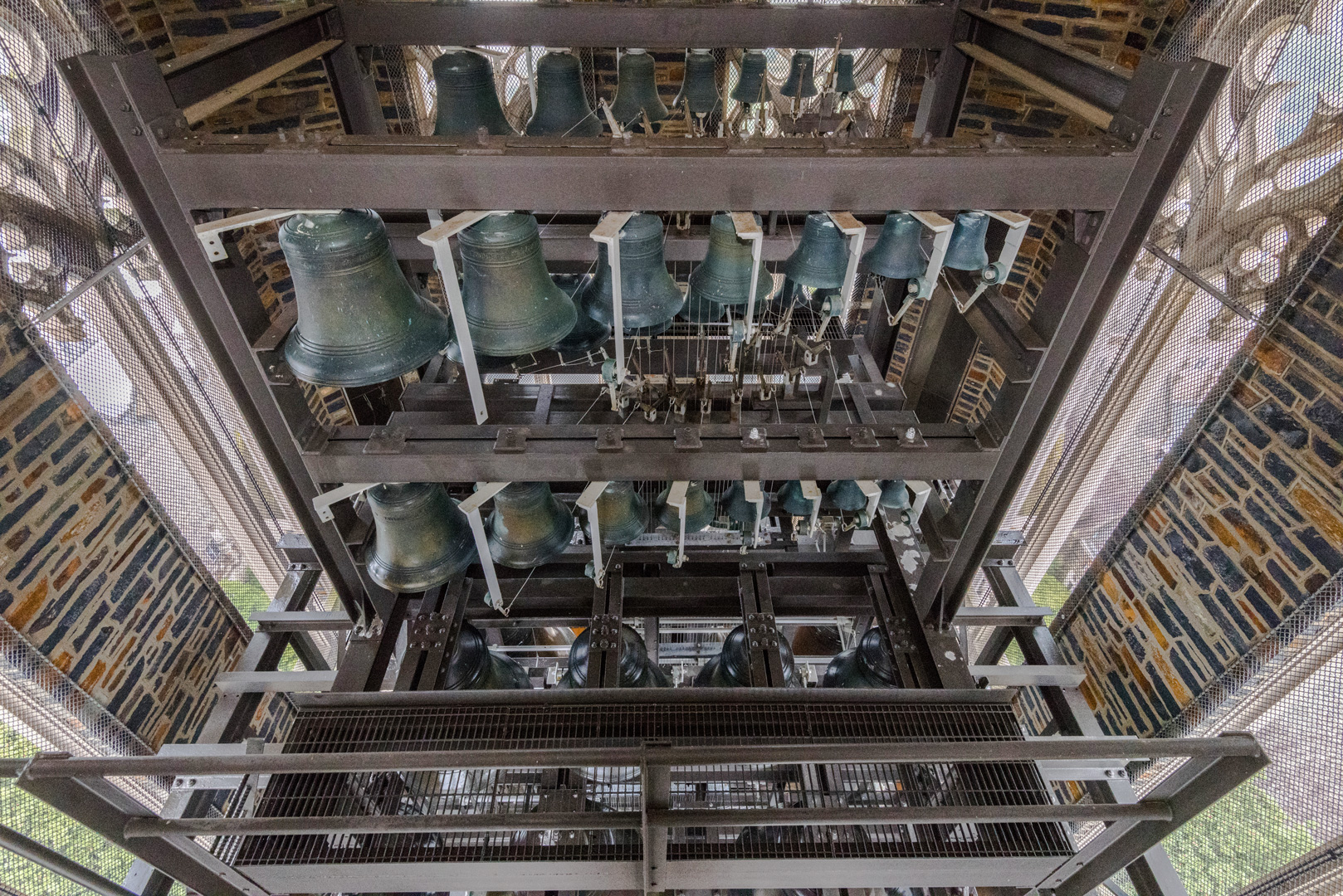 This is the collection of carillon bells housed in the tower of Duke Chapel.