Duke Chapel is exceptional in having four outstanding pipe organs, each in a different style, which are used regularly for worship services, recitals, and the study of organ performance.

Learn more below about organ programs at the Chapel as well as each individual instrument. 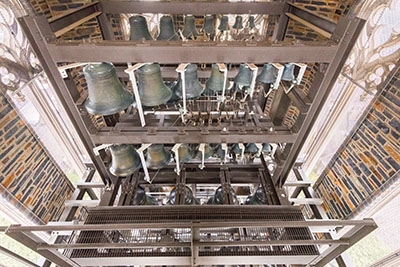 Carillon bells
https://chapel.duke.edu/carillon
In the tower of Duke Chapel is a fifty-bell carillon, played on weekdays at 5:00 p.m. and before and after Sunday worship services and special events. In 2018, the carillon was named in honor of J. Samuel Hammond, university carillonneur emeritus.

The carillonneur begins the 5:00 p.m. recitals by ringing the hour on the largest bell. For holidays or other public occasions, the programs often feature selections appropriate to the day. In a tradition started during Terry Sanford’s tenure as university president, the Duke Alma Mater (“Dear Old Duke”) is played every Friday.

Listen live online to the carillon weekdays at 5:00 p.m. Eastern Time on the Chapel's Facebook page.

During the academic year, the Organ Recital Series presents free concerts by internationally acclaimed organists, including the university organist and the Chapel organist. The series is made possible through the generous support of the Marvin B. and Elvira Lowe Smith Memorial Fund, established by their daughter, Alyse Smith Cooper. All recitals are on Sundays at 5:15 p.m., unless otherwise indicated, and are free and open to the public.

Watch a selection of performances from the series:

With its world-class organs, excellent choirs, and a tradition of fine sacred music, the Chapel boasts a treasure of resources found in no other educational institution in the country. As stewards of this heritage, Chapel Music has the responsibility to nurture, to teach, and to worship God using all these assets and all of the talents of its staff. To ensure Duke Chapel's great musical traditions for the future, the Organ Scholars program was created in 2015.

Open organists' rehearsals are held regularly in the Chapel by the Chapel organist and local organists. Visitors to the Chapel are invited to listen from 12:30 to 1:30 p.m. Tuesday through Thursday during the academic year, excluding breaks and holidays. To confirm if an open rehearsal is happening on a given day, check the calendar. For a formal organ demonstration and tour, please email Chapel Music or call 919-684-3898 one week prior. 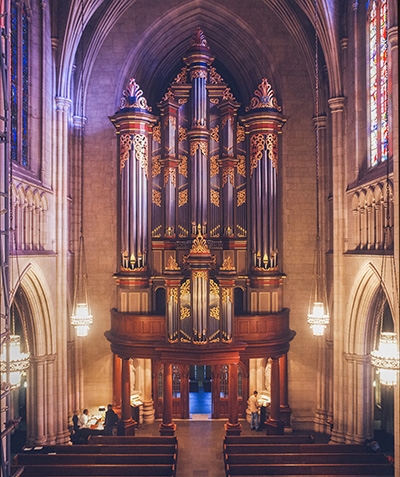 The Flentrop is a mechanical instrument that contains 5,033 speaking pipes, controlled by four manual keyboards and pedal. The main case houses four divisions of pipes; it rises approximately 40 feet above the gallery floor and is about 4 1/2 feet deep. A smaller Rugwerk division, located on the gallery rail, houses one division of pipes; it is 10 feet high and 4 feet deep. The cases are made of solid African mahogany, painted and decorated in gold leaf and various hues. The gallery, designed and built in Durham by William T. Muirhead, is constructed of solid oak in the classical style.

At Mr. Flentrop’s suggestion, the acoustics of the Chapel were improved to provide an ideal environment for the organ. When the Chapel was first built, its acoustics were deliberately deadened through the use of special sound-absorbing stone tile. The absorptive tile was sealed, increasing the maximum reverberation time, and a time-delay speech-reinforcement system was installed to accommodate the spoken word.

The Flentrop Organ was first played publicly in an informal preview for Duke University students on December 6, 1976, and in the Sunday morning worship service on Founders Day, December 12, 1976. An inaugural recital was played at 5:00 p.m. that afternoon by then-University Organist Fenner Douglass. See the dedication speech, here.

The Flentrop organ is played mainly for recitals and for hymns and voluntaries during worship services and university events.

Read the specifications and stoplist for the Flentrop Organ.

Watch a video on the process for tuning the Flentrop Organ: 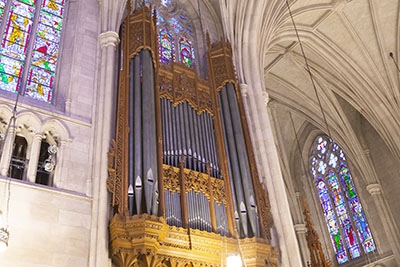 Kathleen Upton Byrns McClendon Organ
Behind the façade pipes and carved oak screens, the Kathleen Upton Byrns McClendon Organ is lodged in chambers on both sides of the chancel. It remains Duke Chapel’s original organ, built and installed in 1932 by the Aeolian Organ Company of New York. This remarkable instrument was the last major organ made by Aeolian before it merged with the E. M. Skinner Organ Company, and is the firm’s only significant organ built for a church.

Designed in the post-Romantic tradition with electro-pneumatic action, which was in fashion at the time of its construction, the organ is known for its extremes of dynamic expression and the orchestral voicing of its individual stops. The pipes visible from the nave only hint at the Aeolian’s size, for approximately 6,600 pipes are located in the large chambers. In 2008 the organ was completely reconditioned by Foley-Baker, Inc. The original four-manual console has been replaced by a new one in similar style, built by Richard Houghten as part of the renovation.

Read the specifications and stoplist for the Aeolian Organ.

Watch a video about the work that goes into keeping the Chapel's four organs in tune and pitch perfect: 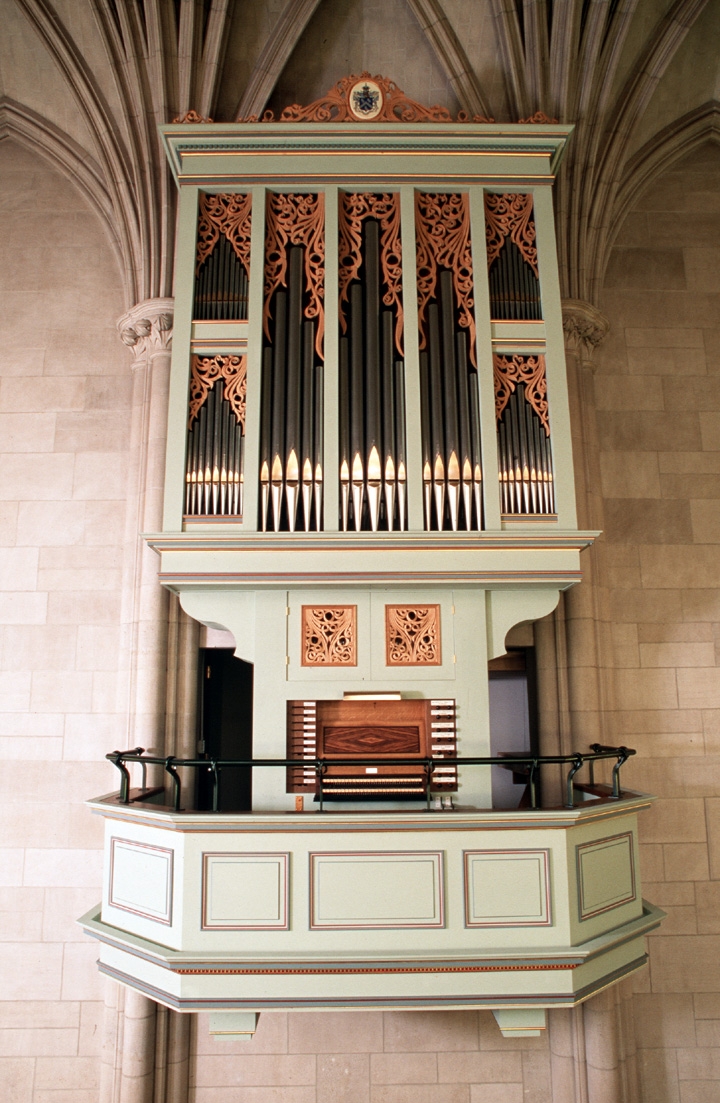 Brombaugh Organ
Located in a “swallow’s nest” gallery, the Brombaugh organ (1997) in the Memorial Chapel is modeled after Renaissance Italian instruments. Modified to accommodate other schools of organ music as well, this two-manual and pedal instrument of nearly 1,000 pipes produces gentle, sparkling tone on very low wind pressure. The organ is tuned in meantone temperament, the tuning system used for most keyboard instruments in the 16th and 17th centuries. Carved pipe shades are made from centuries-old Appalachian oak, while the Duke family crest is visible at the very top of the richly polychromed organ case.

Perhaps the most significant feature of the Brombaugh organ is its use of the historical "meantone" tuning system. In the modern "equal temperament" tuning system, the octave is divided into twelve equal half-steps, rather than being based on the natural scale. This allows modern keyboard instruments to play in any key, but it means that most intervals are not "pure," according to the natural scale.

In contrast, the meantone system of the Chapel's Brombaugh organ uses pure tuning for major thirds, offering choices of e-flat/d-sharp and g-sharp/a-flat. This means that it favors certain intervals, chords, and keys, while making others unusable. In the "good" keys, the contrast between consonance and dissonance is enhanced. Early music that might seem bland when played on modern instruments "springs to life." Only a handful of modern meantone organs exist in the United States, and its early Italian design makes the Brombaugh even rarer.

Read the specifications and stoplist for the Brombaugh Organ. 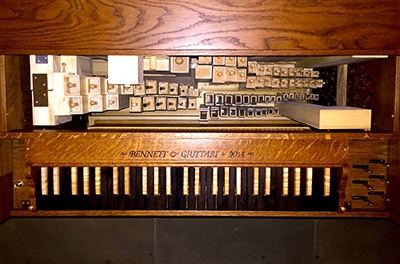 Continuo Organ
The Bennett and Giuttari continuo organ, Opus 46, was delivered in November, 2014, and had its first public appearance for the Messiah performances.

The names of the stops are:

The organ has four ranks (complete sets of pipes) but three stops.  The Holtzprincipal 2’ can be taken out and the Regal 8' put in its place. So, there are four ranks, but three can be used at one time.

The Gedeckt, Rohrflote, and Holtzprincipal are all made of wood.

The Regal is a reed stop, meaning it has a thin brass tongue that produces the sound.