About the Chapel Menu

Duke University Chapel is, indeed, the “great towering church” that James B. Duke requested and has become a widely recognized symbol of the university. As such it offers a magnificent gathering space for significant events in the life of the university and its members.

While the Duke family was Methodist, Duke Chapel services have always been ecumenical, and the Chapel itself is a sanctuary open to all people throughout the year for important personal moments of prayer, reflection, grief, and gratitude.

As a profound symbol of faith on the campus, the Chapel is a suitable institution to act as the moderator for Religious Life at Duke. The Chapel, in partnership with the Division of Student Affairs, convenes, supports, and advocates for all of the twenty-three Religious Life groups on campus that serve students, including Buddhist, Catholic, Hindu, Jewish, Mormon, Muslim, and Protestant organizations and groups. Programs such as the  provide students with opportunities to learn about other faiths as they explore their own.

The Chapel is also a vibrant center of interdenominational Christianity. About one thousand people participate in services in the Chapel each week, encountering deep traditions of compelling preaching and stirring choral music. With a robust sacred music program, a comprehensive vocational discernment program, an active Congregation for care and service, and a community ministry that partners with Durham nonprofits and churches, the Chapel serves the campus and the community in fulfillment of the University’s historic motto (Eruditio et Religio) by bridging faith and learning. 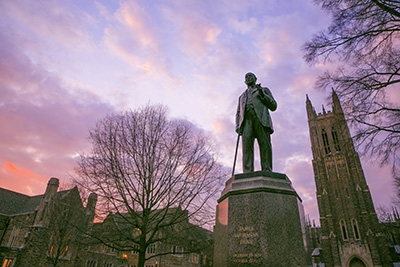 James B. Duke statue in front of the Chapel
Standing at 210 feet in the center of campus, of the original buildings at Duke University, the Chapel was planned first and built last. The architectural style of the Chapel is English Gothic, but it is modeled upon no particular cathedral, college chapel, or parish church. The architects of the Chapel were Horace Trumbauer of Philadelphia and his chief designer, Julian Abele, America’s first black architect of renown. The cornerstone was laid October 22, 1930, and construction of the Chapel required more than two years. It was first used at commencement in 1932 and was formally dedicated June 2, 1935.
Mission

Read about the Chapel’s mission, vision, and strategic plan.

Discover the many ways to give to the Chapel’s mission and ministry.

Learn about the people, stones, windows, and events that have shaped the Chapel.

See the latest news and updates from the Chapel and find resources to help members of the news media.