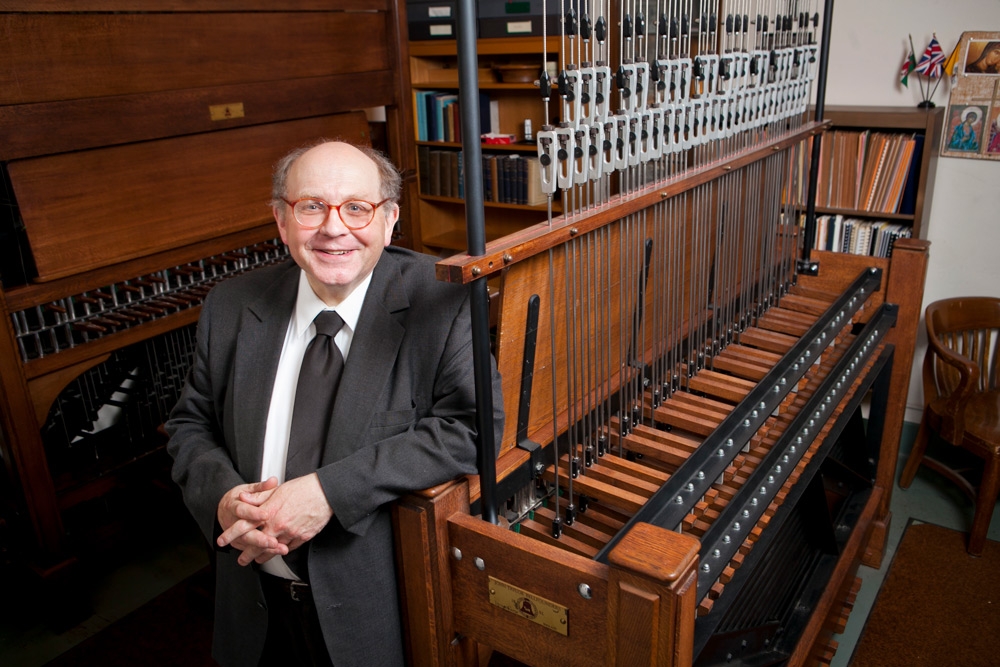 At the passing of University Carillonneur Emeritus J. Samuel Hammond on February 25, tributes poured in for the reserved, witty, and dignified man who influenced so many people through his music, faith, and gentle demeanor. The university lowered its flags, Chapel Carillonneur Joseph Fala played an extended recital of some of Hammond’s favorite songs, people gathered on the Chapel Quad to hear the carillon, and the Associated Press ran a story on the “Man who played Duke Chapel bells for 50 years.”

“It is fitting that Sam made music in the tower because he was a towering human being, full of grace, charm, humility, dignity, wisdom, and faith,” Chapel Dean Luke A. Powery said at the time of Hammond’s death at age seventy-three. “Sam will be missed but his musical, resonant life will reverberate in our hearts and lives for many years to come.”

Colleagues at Duke Libraries wrote about Hammond’s presence at the library for forty-eight years as a music librarian and rare book cataloger. In his honor, the Rubenstein Library purchased a rare seventeenth century study of bell ringing in Latin.

“There was no one I’d rather give a curious old book to than Sam, just to see what he thought and how it connected to the thousands of others he had taken his glasses off to pore over,” wrote a Libraries colleague, Gary R. Boye. “You can’t ‘Google’ information like that.”

“Soon after I began working at Duke in 2010, Sam offered to make me a scarf,” wrote another colleague, Naomi L. Nelson. “I had no idea how broad his talents were, and I was touched by this personal gesture as I was trying to find my footing in the library. A beautiful blue scarf soon appeared in my inbox with a handwritten note.”

“Always dignified, but with an impish twinkle in his eye, Sam kept every one of those young people absolutely rapt as he explained how papyrus was made or how one might correct an error written on vellum,” she wrote. “He addressed them with calm respect and they responded by listening intently, asking excellent questions, and behaving with impeccable manners.”

Chapel Music honored Hammond during its spring concert with a performance of one his favorite hymns, “O God, Beyond All Praising,” arranged by Richard Proulx.

“Most of what we do musically at Duke Chapel requires people to enter the building,” said Chapel Music Director Zebulon Highben said. “The carillon is different: It can be heard all over West Campus and beyond. The sound of those bells is omnipresent in the life of our community, but also unassuming, a gentle accompaniment to the rhythm of our days. This was Sam, too: omnipresent on campus, unassuming, deeply kind and thoughtful, humbly uninterested in the adulation he deserved. He loved God, he loved sacred music, and he loved Duke.”

Chapel Carillonneur Joseph Fala, who now plays the Duke Chapel carillon named in Hammond’s honor, first met Hammond when Fala was a Chapel Organ Scholar and Hammond would regularly attend Evensong Services. Later they formed a friendship around music as Fala joined the small team of carillonneurs that was created to take over playing duties after Hammond's retirement.

“He was always more than happy to come up to the [carillon] cabin with me and to listen and to critique my playing,” Fala said. “He had a very gentle touch; he had a very deep understanding of that particular instrument.”

“Sam, more than anyone, had this deep appreciation of ceremony and tradition and the sacred life of the Chapel,” Fala said. “He saw the playing of the carillon as first and foremost an expression of his faith.”