The Making of 'Marvel' 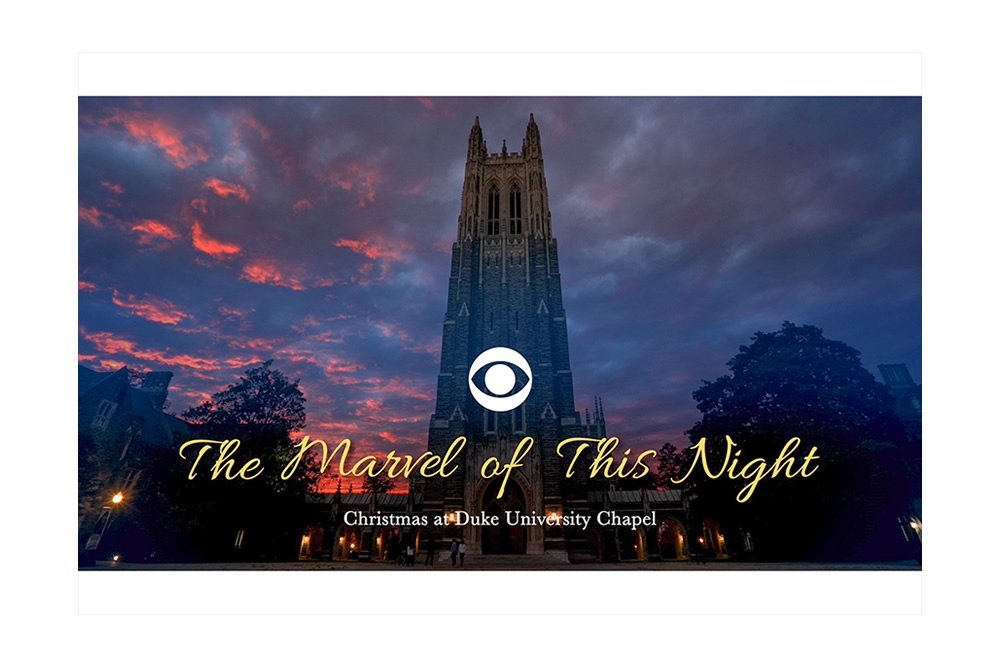 One of the opening scenes shows a congregation packed into the pews, wreaths and lights bedecking the sanctuary, and the chapel’s combined choirs singing the anthem “Savior of the Nations Come” as they surround the congregation.

The scene is set for celebrating Christmas, but what the camera reveals in a matter of seconds actually took months of planning and hundreds of people to bring to life. This is their story.

Where it all Began

The genesis of “The Marvel of This Night” can be traced to this past summer when Duke Chapel was selected by CBS Television to produce the network’s annual Christmas Eve show.

Chapel Dean Luke A. Powery recognized a calling for the chapel community. “I saw it as a rare opportunity for the chapel to tell the great message about the birth of Christ to the nations,” Powery said.

Powery ended up presenting a version of that message in the program in the form of a five-minute reflection, a kind of mini-sermon.

“‘Glory to God in the highest’ but we also find the glory of God in one of the lowest places,” Powery said in his reflection. “This night, glory comes in human flesh. A small person, a child, Mary’s baby.… Glory in simple human gestures, small packages, little things of ordinary life.”

The chapel has been celebrating Christmas Eve with a Lessons and Carols service for more than 50 years, and that structure of alternating Scripture readings, carols and anthems seemed a logical format for the broadcast, but Powery wanted to work with chapel musicians and ministers to approach the same service format in fresh ways.

“We started by working with this theme of incarnation,” said the Rev. Bruce Puckett, assistant dean at the chapel, about applying the theological concept of God being revealed in the person of Jesus, “and asked how we could tell a story of incarnation—both of Jesus’ incarnation and how incarnation happens today?”

An initial answer came from the chapel’s new music director, Zebulon Highben who had not yet had his first day in the office when the project began (he attended the kickoff meeting via cell phone). He identified the song that would give the service its name: a text by the 20th century American poet Jaroslav Vajda called “Before the Marvel of This Night.”

“I’ve always loved it because it addresses the angels,” Highben said about the hymn, whose lyrics imagine speaking to the angel hosts before they announce the birth of Christ. “Most Christmas carols are put in our voice or they are descriptive; this carol is directed to the angels and all three verses are telling the angels what to do.”

With this theme of a heavenly quiet anticipating explosive glory, Highben, Powery and Puckett began to outline a service that would present Christmas through sung and spoken words.

Highben looked for opportunities to reflect the Duke community and the chapel’s theme of openness through the music in the service. This included commissioning new arrangements of traditional carols, selecting pieces by women and African American composers and featuring Christmas songs from other nations.

All three of the arrangers were present at “The Marvel of This Night” to hear their works performed.

“Many music publishers will say, ‘We don’t need any more Christmas music,’” said Highben, himself a published composer. “But at the same time, more people go to choir concerts in the Christmas season than any other time of year, so there is a need for a lot of Christmas music.”

A final theme in the music was the global character of the campus community and the shared celebration of the Christmas message. All three chapel choirs—Chapel Choir, Vespers Ensemble and Evensong Singers—rotated through music from Sweden, United States, China and England, which culminated with a percussive call-and-response song from Cameroon titled “He Came Down.”

The Contributions of Many Hands

As the service began to take shape over the course of the fall semester, the circle of people participating in it began to widen.

First, the choirs began rehearsing the music they would sing.

“We were already being given the music so we had the material at our fall retreat [in early September],” said Dr. Walker Robinson, T ’00, MAT ’01, MD ’09, HS ’12, who sings in two of the chapel’s choirs and serves on its national advisory board. “Zeb [Highben] was very deliberate throughout the semester to have some portion of every Wednesday night rehearsal devoted to ‘Marvel of This Night’ music.”

Chamber Players were engaged to accompany the choirs.

In the fall, Jordyn Blake, a junior neuroscience major from Atlanta, who is president of the student choir United in Praise, took up the challenge of learning the solo parts for two of the songs—the spiritual “Mary Had a Baby” and the Cameroonian song “He Came Down.”

“Singing is all about patterns, and I’ve found with science it’s the same way,” Blake said about the connection between her major and her ability to learn music. “I find the skills are transferable: If you’re good at math and science, you could potentially be good at reading music.”

In addition to the singers, the service called for readers of seven Scripture passages. To fill those roles, Puckett recruited volunteer lectors from across the university and included undergraduate and graduate students to read the lessons, along with staff and faculty from Athletics, Duke Health, the Sanford School, Trinity College and the Divinity School.

Nohemi Ramirez, a staff specialist in the Divinity School Chaplain’s Office, was one of the lectors who met with Puckett to practice her reading.

“The best feedback was [Puckett] reminding me that this is a story—and specifically this passage is a beautiful story full of emotions,” Ramirez said about her reading of the first chapter of the Gospel of Luke, which describes the Angel Gabriel addressing the Virgin Mary about her surprise pregnancy. “That’s how I prepared: to just remember that I am telling a story and to strive to convey all of those emotions.”

Working with all the people who will be seen in the Christmas Eve broadcast was a large group of people making things happen behind the scenes.

Early on the chapel hired experts to capture the sights and sounds of the service for the broadcast production. The Boston-based, Grammy Award-winning audio production company Soundmirror used scores of microphones to record hundreds of voices and instruments. Drawbridge Media from Raleigh used eight state-of-the-art cameras to catch both the grandeur and detail of the service.

On campus, Steven Palumbo, a director of facility operations, and colleagues with Duke Facilities ensured the chapel’s lights, power and cables were in order and even provided a flourish at the end of the service by turning the chapel tower blue with exterior colored lights. Duke Technical Services handled the in-house amplification, University Communications assisted with filming and extra footage, and the Box Office issued tickets and did house management.

“It was kind of hard to believe that we would have the chapel ready in time because I knew it was a massive event,” said Oscar Dantzler, a housekeeper at the chapel who cleaned and helped arrange chairs. “People in the background did some of the most important part.”

Coordinating many of the moving parts were three co-producers at Duke: James Todd, communications manager at the chapel; Amanda Millay Hughes, director of development and strategy at the chapel; and Kristen Brown, associate vice president for university communications.

“So many people pulled together to make it happen,” Powery said about the project. “What stands out to me is the people—the great people in the great towering church.”

With so many pieces in place, “The Marvel of This Night” needed one more miracle: to move Christmas one month earlier. Because the program was required to be pre-recorded and edited before broadcast, the service itself had to be held weeks in advance of Christmas. The chapel calendar had room for an extra service exactly one month before Christmas Eve on Sunday, November 24.

With publicity materials going out throughout the fall, free tickets for “The Marvel of This Night” were first available through the Duke Box Office to Duke students on October 24 and then to the general public on October 29. They were claimed within a few days.

In the week before the service, longtime chapel supporters James and Eleanor Ferguson organized their team of a dozen volunteers to dress the chapel with its traditional Christmas decorations.

A dress rehearsal the day before the service allowed ministers, musicians, singers, readers and production crew members to both practice the entire service and produce a first recording.

“I think I realized what ‘Marvel of This Night’ actually was the second I walked into the chapel Saturday morning for the dress rehearsal,” said Jannis Stöter, a junior computer science major from Schwerin, Germany, who sings bass in the Chapel Choir. “It was Christmas before Thanksgiving.”

Blake had a similar experience singing solo in the spiritual “Mary Had a Baby.” “At dress rehearsal, I was thinking, ‘OK, I know what I am going to do,’” she said, “but at the actual service I really sang it the way I envisioned it.”

“Basically we sang a service twice,” said Robinson the choir member. “They both felt like worship services, which is what I would have wanted it to be.”

And so when the chapel doors finally opened for a Christmas service the Sunday before Thanksgiving … “People showed up!” Powery said. “We needed people as congregation members to participate in the service.”

With the chapel full of people—many dressed in Christmas red—the congregation was indeed essential as they sang out in ten of the service’s carols and offered the “Thanks be to God” response at the conclusion of each reading.

“The music is never fully alive until you put it into context,” Highben said. “Hearing the congregation sing was the hair-raising, goose-bump-inducing factor for me.”

“I’ve never been able to sing Christmas music with the Chapel Choir because I leave campus right around the Advent season,” said Ellie Sweezy, a senior political science major from Charlotte, who is president of the Chapel Choir, “so I really enjoyed the opportunity to focus on Christmas repertoire.”

“It was a really beautiful service—one of the most beautiful that I have ever seen in my life,” Purba said. “I’m grateful to be part of this service; it is a privilege to serve God and his people.”

The president of the chapel’s national advisory board, Charles Berardesco, T ’80 has known about services, concerts and events in the chapel since he sang in the choir as a student at Duke. He said “The Marvel of This Night” builds on a strength of the chapel: “This idea of [the combination of] beautiful music, beautiful liturgy and profound thought.

“Not only is there the pride of your own school producing the program, but it is really consistent with the vision of where the chapel goes next,” he said. “It gives us a national spotlight.”

An article on the website Classical Voice of North Carolina summarized the service this way: “‘The Marvel of This Night’ recalled the event of the word made flesh from prophecy through fulfillment in scripture, poetry, prayer, and music….. A large number of musicians and liturgists participated in the service, all of high quality and well prepared.

“There are not words big enough to describe this event fully.”

Words may not convey the full effect of “The Marvel of This Night,” but the broadcast on Christmas Eve presented a full hour of music and joy, narrative and hope. A number of participants told friends and family to tune in, including choir member Stöter. 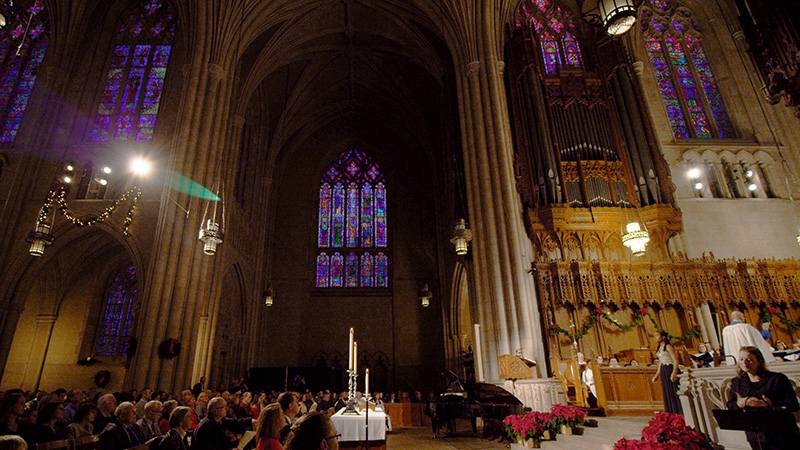