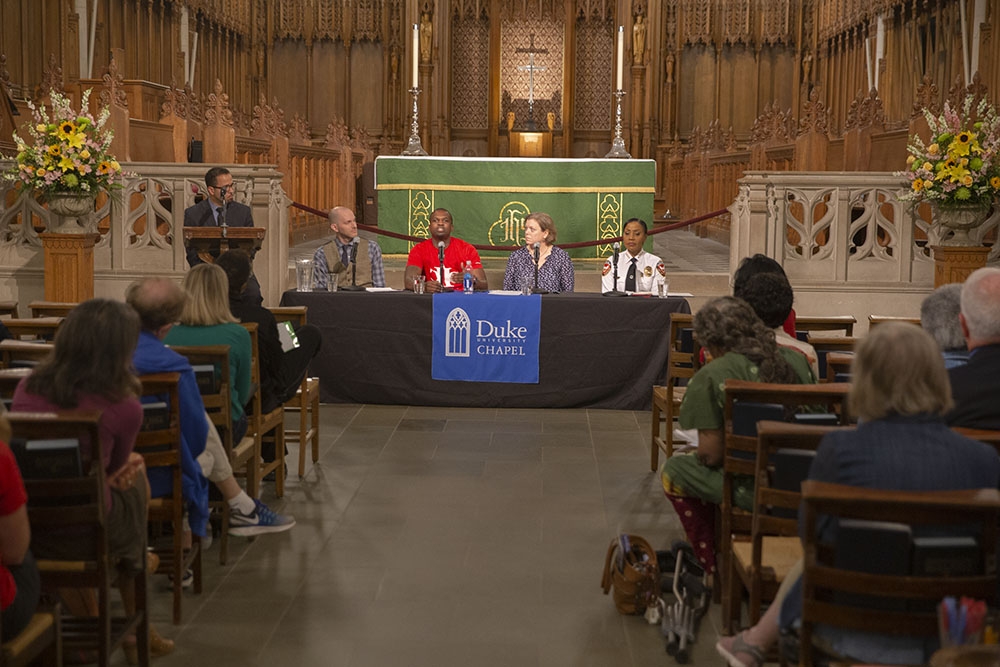 Chapel Dean Luke A. Powery moderated the discussion, Every Life Sacred: the Urgency to End Gun Violence, before an audience of fifty people with more than fifty people additionally watching the livestream of the event.

(Watch the WRAL News coverage of the event. Read the (Duke) Chronicle article about the event.)

“In many ways this conversation tonight is not just a theological one or a sociological one but it is personal for many of us,” he said.

Durham Police Chief Cerelyn “CJ” Davis cited a number of measures her department has taken to deter gun violence, including educating people on securing guns they own, training police on de-escalation tactics, and cultivating relationships in communities with high rates of violence. 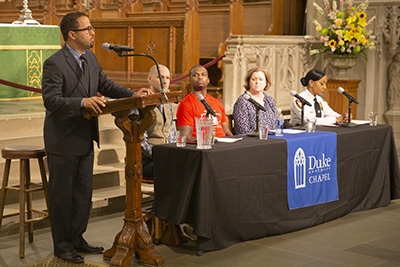 Dean Luke A. Powery introduces the panelists.
Davis also emphasized the importance of addressing factors, such as poverty and social problems, that lay the foundation for crime.

“I’ve been doing this thirty years, and we cannot arrest crime away,” she said.

“To me this really boils down to decades of talking about the same thing…,” Davis said. “And when you really listen to the community—and the voice of the community—the community is saying over-and-over again, … ‘Nobody is going to get serious about this until it happens in their community.’” 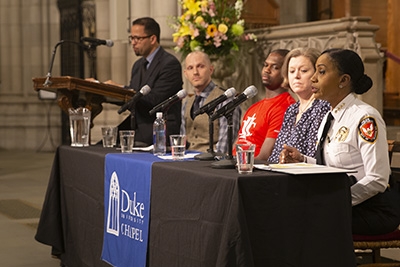 Durham Police Chief CJ Davis speaks.
“There’s been a real turn in the gun-violence-prevention movement—inspired by a lot of social science—toward what we call a risk-based approach to reducing gun violence as opposed to a categorical approach,” Goss said.

Rob Belcher founded a Durham community group Chance2Change that works with residents to build community, create a visibly peaceful presence in the streets, and share information on gun violence prevention. 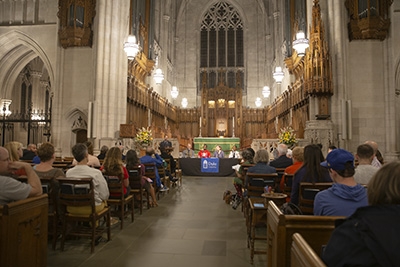 Audience members listen to the panelists.
“We have to come together, and we have to be visible,” he said.

The Rev. Ben Haas is the executive director of the Religious Coalition for a Nonviolent Durham, which holds vigils for people who are murdered and helps men and women transition out of prison.

“When we find in our heart to declare unacceptable what has already happened, we are speaking to what we will allow in the future,” Haas said. “The way that we create a culture of care around the suffering that violence has wrought in this community is precisely the same conversation we have about … how we will prevent violence in our community.”

The discussion was part of the Chapel’s Bridge Panels series, which seeks to connect people from disparate walks of life in order to discover shared pathways toward the beloved community of God.