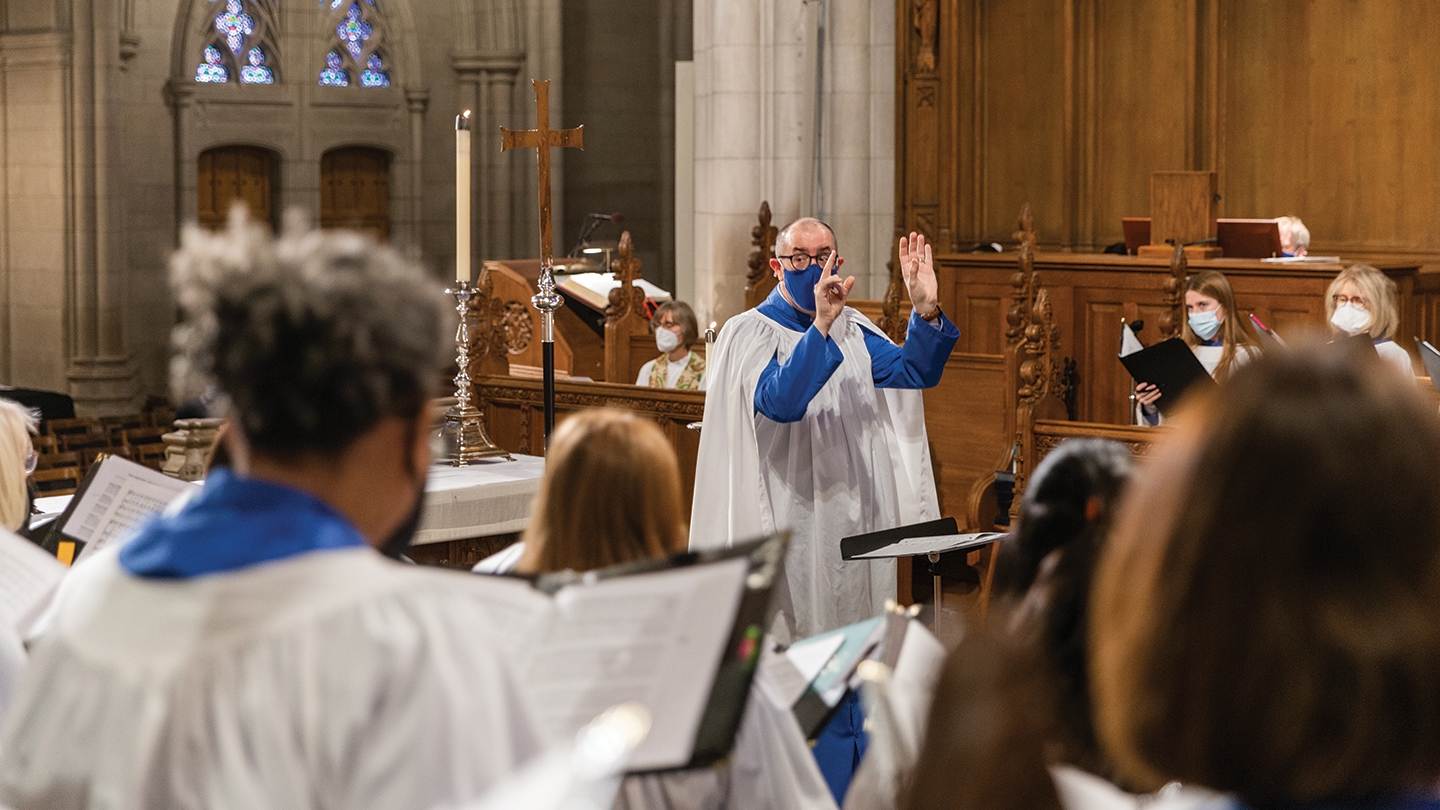 The impact of the Chapel’s music program is visible at organ recitals, in worship services with one of the choirs singing, and during the annual performances of Handel’s Messiah. Both in-person and online, we continue to fill the world with Sacred Music. But what may be less visible is how Chapel Music contributes to church music around the country and across the world through a publication series of sacred music scores. 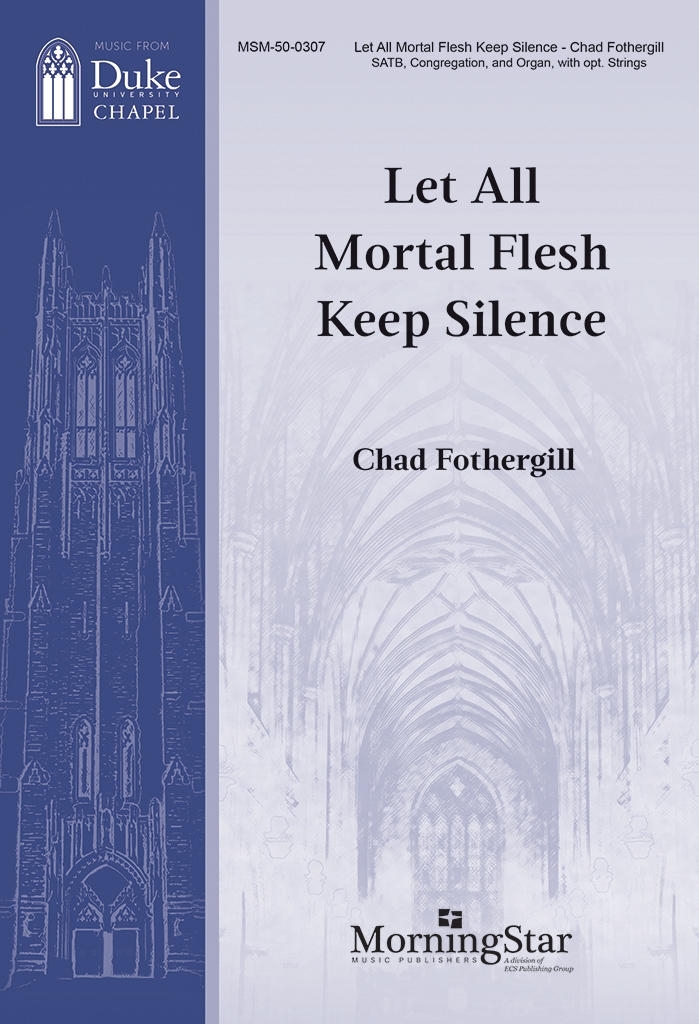 In the two years since it was launched, the twelve scores published in the “Music from Duke Chapel Series” with ECS Publishing Group/MorningStar Music have sold more than 20,000 copies—and that was during the pandemic when many choirs were inactive or scaled back. As choirs return to singing together, the series is on track to add another six scores this spring.

"Any established choir and conductor is programming ‘the greatest hits’ from the last six hundred years—music from the Renaissance, Baroque, Classical, Romantic, and modern eras,” Chapel Music Director Zebulon Highben explains about the purpose of the series, “but they are also always on the lookout for new music.”

“By establishing a new publication series, we are saying that we want to be a leader in church music, not only in performing new music, but in identifying, highlighting, and then publishing it for other choirs,” he says.

One church that has benefited from the series is First Presbyterian Church in Columbia, South Carolina. For Christmas 2020, they recorded a setting from the series by composer Chad Fothergill of “Let All Mortal Flesh Keep Silence.” This past December their choir sang it in a live concert. The church’s director of music, Dr. Daniel Cole, says the piece was “the perfect way to begin our Advent concert.”

“The mysterious, hushed, and haunting quality of the string writing serves as a beautiful, musical meditation on this ancient hymn and on the mystery of the Incarnation,” he says. “The work ends with a stunning and transcendent descant, one that will truly inspire the entire ensemble and congregation.”

In addition to musical excellence, the criteria for the series includes “pieces performed in worship or in concert at Duke Chapel, including newly commissioned works, modern editions of historic repertoire, and liturgical music by a diverse array of composers.”

Some pieces are new arrangements of beloved songs such as Roger Holland’s treatment of the spiritual “Balm in Gilead,” while others are original compositions, such as Jane Marshall’s “Words from Two Women.” The composers themselves have diverse backgrounds. By the end of the spring, the series will have published five pieces by women composers and seven pieces by Black composers. So far nine of the twelve currently published pieces have debuted in Chapel services or concerts.

“I used to work with a pastor who talked about worship being both ‘home and journey,’” says Mark Lawson, the president of ECS Publishing/MorningStar Music who works on the series, “and this series represents both.”

“There is the René Clausen piece ‘It Is Well with My Soul (When Peace Like a River)’ that is done so well—that’s a home piece,” he says, “and then there are pieces that are going to push them a little and move us somewhere else.”

While many of the pieces in the series come from composers outside of Duke, the Chapel Music staff are contributing to the series through their own creative talents. For example, a forthcoming arrangement of Samuel Scheidt’s “Puer natus in Bethlehem” was edited by Chapel Music Associate Conductor Philip Cave and premiered as part of the Chapel’s 2019 national Christmas broadcast The Marvel of This Night. The premiere of Joanna Marsh’s Te Deum and Jubilate came under the direction of Chapel Organist Christopher Jacobson as part of the recent Poetry in Music concert by the Chapel’s Evensong Singers.

Already an established composer when he came to the Chapel, Highben is also contributing some of his own new works to the series. One of them is “Easter Dawn,” an anthem based on the sonnet of the same name by the British poet Malcolm Guite. As part of a Chapel worship service in September of 2019, Guite read the poem. The text was so striking to Highben that he sought permission to set it to music. The Chapel Choir premiered the piece as a virtual anthem recording in the online Easter service on April 4, 2021. This year they will sing it in person during the 9:00 a.m. communion service on Easter Sunday, April 17.

Since coming to the Chapel, Highben has also composed hymns, including one in honor of Chapel Dean Luke A. Powery on the occasion of the twentieth anniversary of Dean Powery’s ordination.

“When you are writing a hymn tune, you are writing music for a group of people who have not practiced and aren’t necessarily musically trained,” Highben explains. “So, the trick with a hymn tune is to write something that is accessible enough that people can sing it having only heard the melody once, but also interesting enough that it doesn’t just retread what the thousands of other hymn tunes have already done.”

While the Music from Duke Chapel Series is new, it builds on a longstanding tradition of music publication at the Chapel. In  the 1970s, under former Chapel Music Director Benjamin Smith, the Chapel published a choral music series with the Chapel Hill-based Hinshaw Music, including works by major composers of the time such as Emma Lou Diemer and Gilbert M. Martin.

Then in 1987, the Beach Hymnody Endowment was established in honor of late Duke Divinity School Professor Waldo Beach with the purpose of producing new hymns. Over the years, the endowment has funded hymn competitions and commissions. One of the commissioned hymns, “Praise the Source of Faith and Learning” by Thomas Troeger, is based on the Duke motto Eruditio et Religio and appears in several hymnals. Another commissioned hymn about reconciliation comes from an intriguing combination of a text by the late Duke theologian C. Eric Lincoln and a tune by the well-known composer David Hurd.

The new Duke Chapel Series is “sort of a return to form,” Highben says. “There was first this activity of generating new choral music, and then there was this period of generating new hymnody, and now we are bringing those two things back and linking them up for the broader community of choirs and conductors nationwide.”