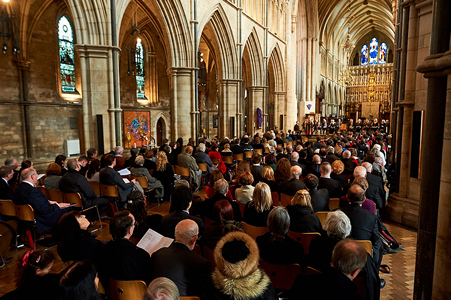 After years of preparation and two days of intensive exams, Duke Chapel Organist Christopher Jacobson has received the highest honor from the United Kingdom’s Royal College of Organists. 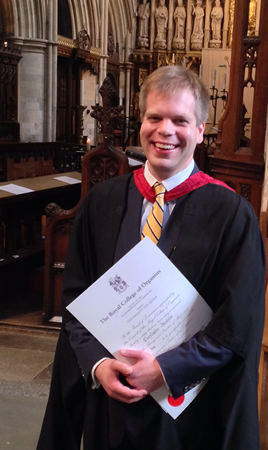 1864, the College received its Royal Charter during the reign of Queen Victoria in 1893. For more than 150 years, the organization has promoted the practice of organ playing and choral directing at the highest standards of competence and artistry.

The College’s Fellowship Diploma, awarded to Jacobson on March 12 at the conferment and hooding ceremony at Southwark Cathedral in London, is among the most prestigious international recognitions for organists.  According to current records, Jacobson is one of only a few Americans to have achieved distinction as a Fellow of the Royal College of Organists (FRCO).

“It’s wonderful to have studied for two years and have that work come to fruition,” Jacobson said.

At Duke, Jacobson conducts the Chapel’s Evensong Singers in addition to playing the organ at worship services, university ceremonies and concerts. He initiated and oversees Duke Chapel’s Organ Scholars program, which provides rigorous training for two organ students each year in the practical skills of keyboard musicianship and sacred music through regular accompaniment of Choral Evensong.  In addition to his duties as Chapel Organist, Jacobson maintains an active solo concert schedule and has performed the entire organ works of Johann Sebastian Bach on several occasions across the United States.

“Being awarded the RCO’s Fellowship Diploma is a major accomplishment in the world of organists, acknowledging Kit’s mastery of a wide range of musical knowledge and keyboard skills,” said Rodney Wynkoop, director of Chapel Music. “This is a professional endorsement of the qualities that led us to invite Kit to join the Duke Chapel staff in 2014, and we are all greatly pleased that he has been honored in this way.”

To earn the FRCO diploma, Jacobson traveled last July to London to take the first of two exams, which included playing a recital and testing of keyboard skills. Before a panel of three judges, he was asked to read complex music at sight, transpose music written in one key into another, and sight-read music with Baroque-style figured bass notation, which requires an organist to improvise notes played with the right hand while playing specific notes with the left.  He was also asked to demonstrate his ability to read open score – instantly translating music written in four concurrent clefs to the keyboard with the accuracy and expressiveness of a rehearsed performance.

“It was nerve-racking and incredibly intense,” Jacobson said. “It’s designed that way to test your mettle; it measures your musical fortitude under pressure.

Jacobson returned to London in January for a series of written academic exams. For these, he composed a fugue in Baroque-style in four-part invertible counterpoint. He transcribed an orchestral score into music for the organ. He wrote historical essays on the organ works of Felix Mendelsohn and organ music from seventeenth-century France, commonly known as French Classic music. He was also asked to demonstrate facility in advanced aural perception by listening to music and recreating it on paper without the aid of the original musical score.

Immediately applicable to his daily work at Duke, mastery of these skills is indispensable for a professional organist, Jacobson said.

“There is no shortcut for these skills,” he said. “They are acquired and sustained only through regular practice over many years.”

During worship services, he will, on-the-fly, transpose a hymn into a different key so that it flows more congruently with the liturgy. With the massive volume of music he encounters every week at Duke, fluent sight-reading is required to get through it all. At a recent Baroque concert with the Vespers ensemble, he performed from complex figured bass notation, which is known as the art of continuo playing.

With no higher-level certification to pursue, Jacobson said he is now focused on passing on what he has learned.

“Really what’s next here at Duke and Duke Chapel is imparting these skills and knowledge to the students, Organ Scholars and other musicians who are drawn to this place.”