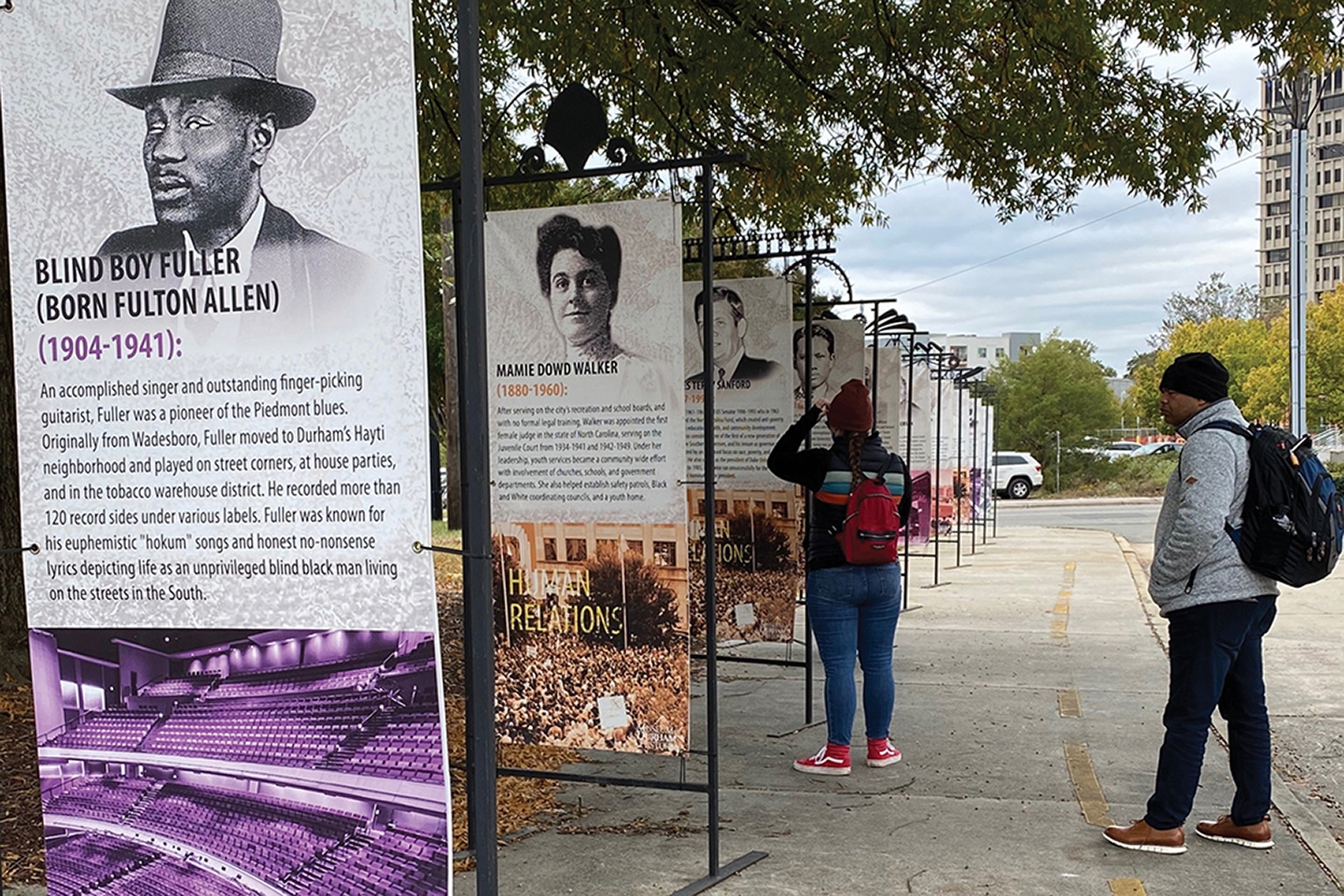 At one stop on the Durham Pilgrimage of Pain and Hope, Kiana Hertogh stood inside one of the slave quarters at the Stagville Plantation. There, she had a poignant reflection:  “I imagined myself as a twenty-something-year-old enslaved woman looking out of the window,” says Hertogh, a Duke Divinity School student. “I had this profound moment of having the privilege of choice, so how am I going to respond?”

“I have freedom, so I should live into that freedom—embrace it, be thankful for it, celebrate it,” she says about the thoughts the experience prompted for her, “but then I have a responsibility to dispense that freedom, to share it, to work towards a community where all people have that same freedom.”

Hertogh was part of a group of seventeen Duke students and community members who spent a weekend in February praying, reading scripture, and visiting sites in Durham that are significant in the city’s histories. Led by the nonprofit DurhamCares, a Chapel community partner, the three-day pilgrimage explores the intersection of the history of Durham, the biblical story, and the lives of the participants. Sites on the pilgrimage include not only the Stagville Plantation, which teaches about the lives of people who were enslaved on the plantation; but also, Duke Memorial United Methodist Church, located near Duke East Campus and named in honor of the Duke Family; and Parrish Street in downtown Durham, the location of what was called “Black Wall Street.” At these places, participants hear from community leaders, such as Virginia Williams, who was part of an early Civil Rights sit-in in Durham, and John Blackfeather Jeffries, an elder in the Occaneechi Band of the Saponi Nation.

One of the leaders of the pilgrimage was the Rev. Dr. M. Keith Daniel, T ’90, D ’05, D ’16, a special programs instructor at Duke and former director of community and campus engagement at the Chapel. As a facilitator, Daniel draws on the book A Mile in My Shoes: Cultivating Compassion in which the South African Methodist minister Trevor Hudson lays out three elements for Christian pilgrimage: encountering suffering, reflection on the scriptures, and openness to transformation into greater Christlikeness. 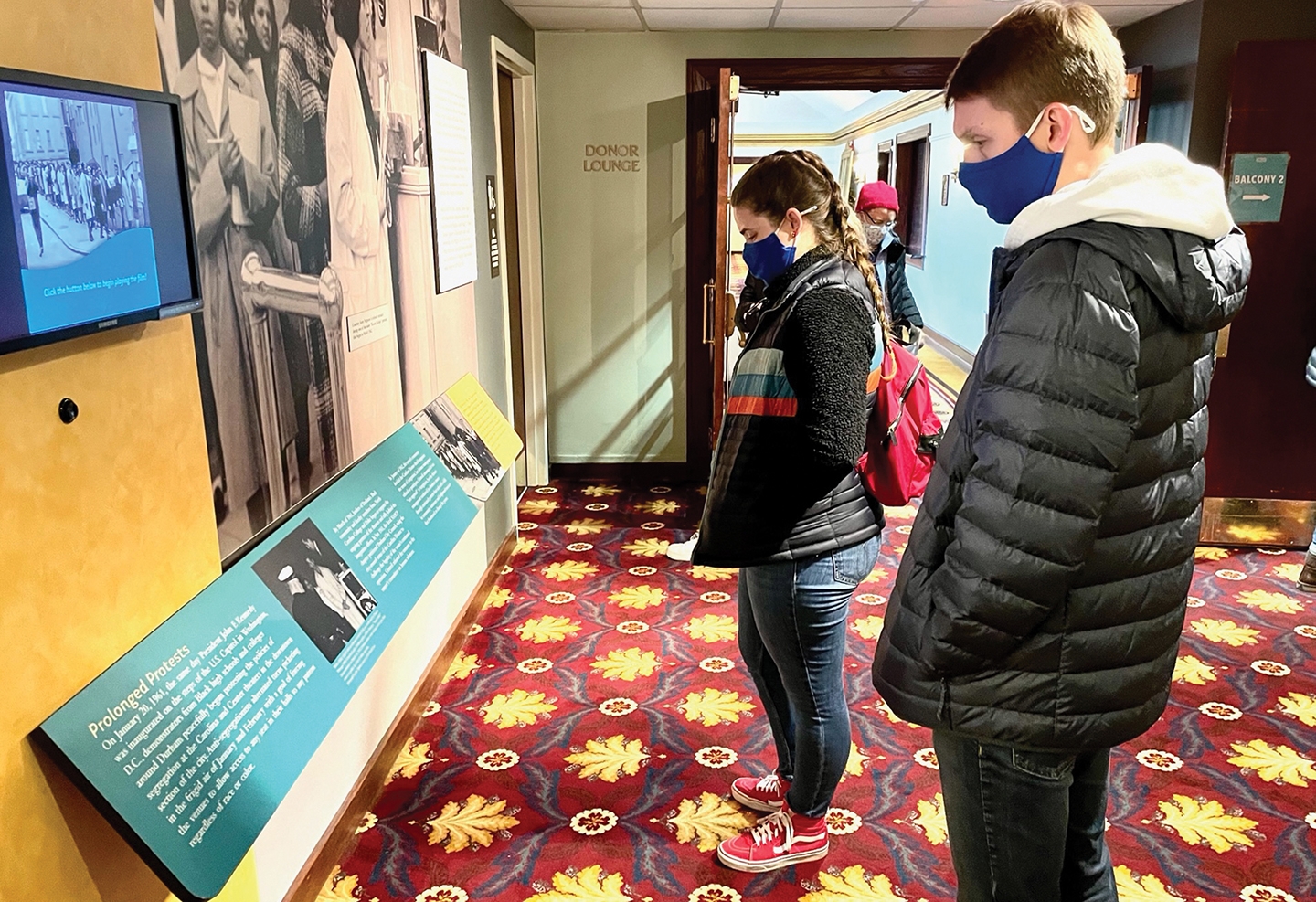 Alt Text:
Two people at left look on at an angled plaque about Durham protests

“There’s a scripture in Jeremiah where the prophet says, ‘Seek the welfare of the city,’” Daniel says. “I think part of that is listening to the history of the city, understanding it, reckoning with it, being troubled by it, and then hopefully moving to some positive action.”

The spiritual dimension of the pilgrimage became clear for Hertogh, the Divinity student who also serves this year as the Chapel’s intern for worship and student engagement.

“Something that was brought up a lot was ‘God is already present in Durham,’ so as people of faith, we don’t need to bring God into situations of lament and suffering,” she says. “The question is more, ‘How do we partner with God in the liberating work that God is doing?’”

Beyond the three days of learning, praying, and reflecting, DurhamCares provides ways for participants to build on the experience. The organization nurtures a network of about 500 pilgrimage alumni through events and an online discussion group, according to Reynolds Chapman, the executive director of DurhamCares. 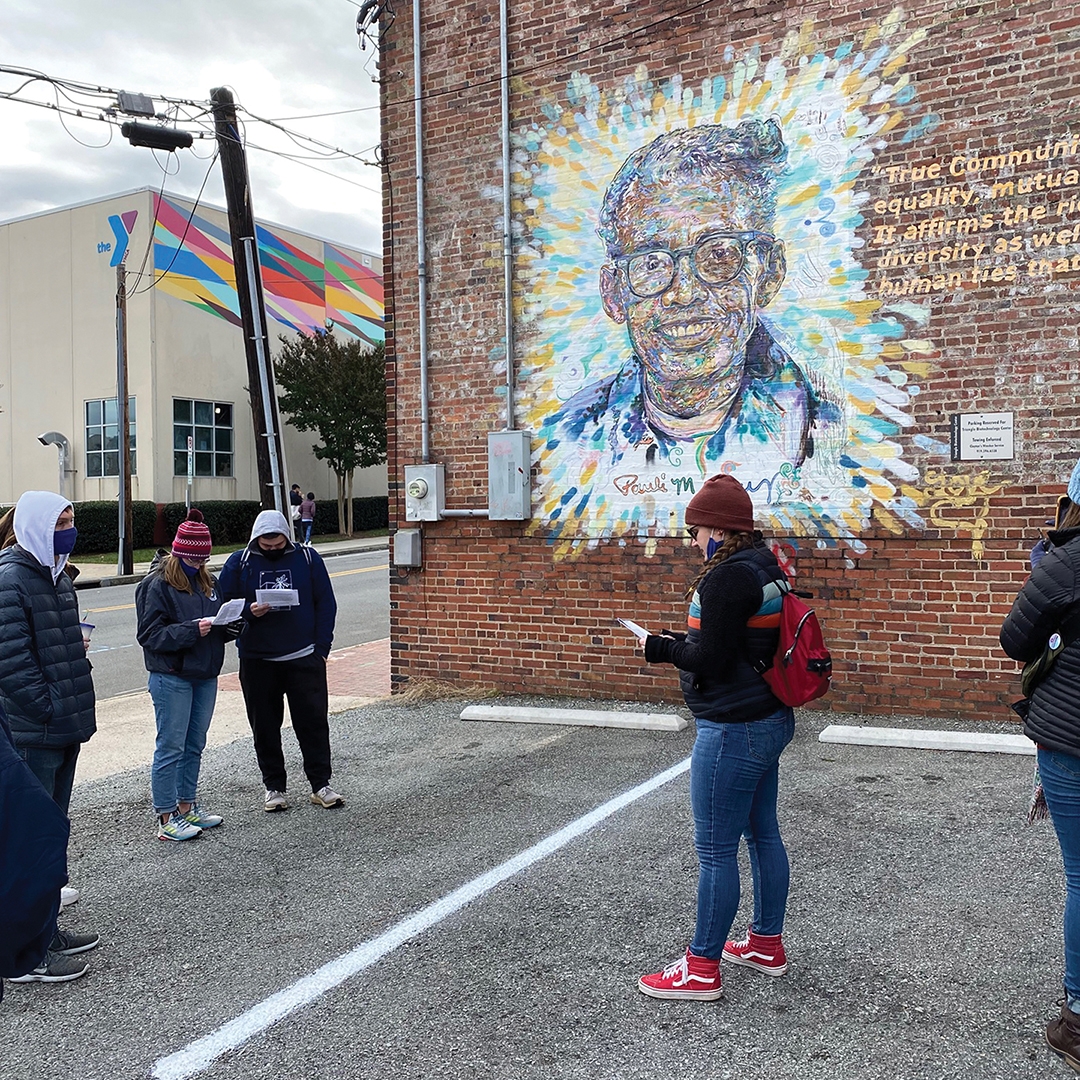 “We really emphasize that pilgrimage is not just a weekend experience,” he says. “We want people to cultivate pilgrimage as a way of life.”

“Other cities have asked us about how these pilgrimages are done,” Daniel says. “In Raleigh right now there are churches that have consulted with DurhamCares about shaping their own Raleigh Pilgrimage.”

“This is an important time to do this kind of work,” he says.

“Place is really important, and I didn’t want to be in Durham without knowing the history and the story of the place,” Hertogh says. “The pilgrimage was an opportunity to listen deeper into the story of Durham.”

Through its partnership with DurhamCares, the Chapel is organizing groups to go on two pilgrimages each year. The next one will be the weekend of September 9–11, 2022.

Originally published in the Spring 2022 issue of Chapel View magazine.