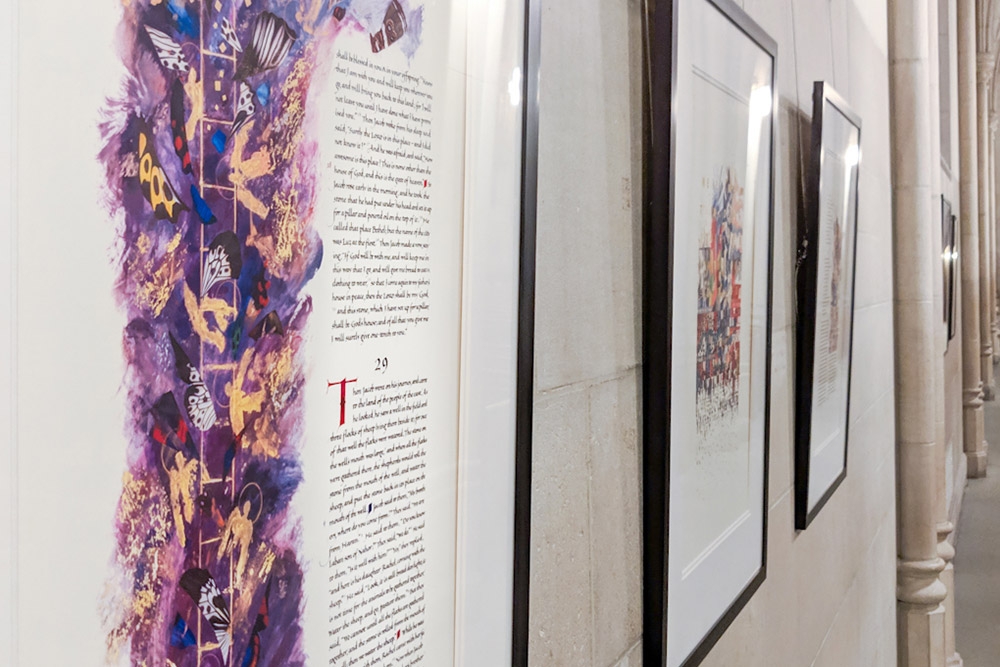 Duke Initiatives in Theology and the Arts (DITA) at Duke Divinity School is sponsoring an exhibition of artwork from the Heritage Edition of The Saint John's Bible that is on display in Duke Chapel from January 17 to March 8. The exhibition is free and open to the public during the Chapel’s operating hours.

The art of The Saint John’s Bible transcends generations of religious traditions, incorporating ancient and modern themes to create a holistic, universal and uniquely human story built around the Word of God. Watch a video about this striking manuscript:

Glimpses of the Saint John's Bible at Duke from Duke University on Vimeo.

This contemporary bible was created by a group of twenty-three scribes, artists, and assistants in a scriptorium in Wales under the artistic direction of Donald Jackson, senior scribe to Her Majesty Queen Elizabeth’s Crown Office at the House of Lords. The team worked in conjunction with a committee of theologians, scholars, and artists from Saint John’s Abbey and University in Collegeville, Minnesota. After fifteen years of work, the pages were completed in 2011 and given a permanent home at Saint John’s Abbey and University.

The Saint John’s Bible incorporates many of the characteristics of its medieval predecessors: it was written on vellum using quills, natural handmade inks, hand ground pigments and gild such as gold leaf, silver leaf, and platinum. Yet, it employs the modern, English translation of the New Revised Standard Version (NRSV) of the bible, as well as contemporary scripts and illuminations. The prints displayed in this gallery showcase a small sampling of the approximately 160 illuminations in the completed work.

Read an article about the exhibition on Duke Today.