Duke University Chapel enriches the aesthetic landscape of Duke and Durham through its annual series of choral concerts, organ recitals, and other artistic events.

Find below a listing of concerts in the Duke Chapel Music 2022–2023 season. Through the generous support of our partners and the friends of Duke Chapel, many of these concerts are free and open to the public. Events requiring tickets are indicated below. Tickets can be purchased at the Duke University Box Office. To receive updates on Chapel Music concerts and programs, sign up for our email newsletter.

My soul magnifies the Lord, and my spirit rejoices in God my savior, for he has looked with favor on the lowliness of his servant… .

Welcome from the Dean and the Director of Music

In the canticle of Mary found in Luke 1:46–55, we see a prototype for the church’s hymn of praise. Mary exults in God’s goodness while recounting who God is and what God has done, for her and for Israel. The Magnificat combines praise, prayer, and prophetic reminders of God’s justice—a justice that lifts up the lowly, feeds the hungry, and casts down the proud and the powerful.

Here at Duke Chapel, each year of programming in our 2019–2024 Strategic Plan focuses on one of the Chapel’s five values: creativity, hope, compassion, justice, and community. This year’s theme is justice, and, like the Magnificat, our Music at Duke Chapel concert season will resound with songs praising God’s goodness and reiterating the church’s desire for a more just world.

We begin with the Magnificat itself, featured in our first Bach program on September 18. The theme continues in a concert by the Jason Max Ferdinand Singers, our semesterly Jazz Vespers services, and a Lenten program of Black spirituals and German chorales. Our spring oratorio brings the theme to its culmination with Franz Joseph Haydn’s Missa in Angustiis (“Mass for Troubled Times”), and the world premiere of a new setting of Martín Espada’s poem “Heal the Cracks in the Bell of the World” for choir, carillon, and orchestra.

The listing below highlights these programs, as well as perennial favorites such as Handel’s Messiah, the organ recital series, and the myriad worship services led by the Chapel’s marvelous choirs, organists, and guest musicians. We hope that you will join us as we add our voice to Mary’s, singing of God’s justice, mercy, and peace. 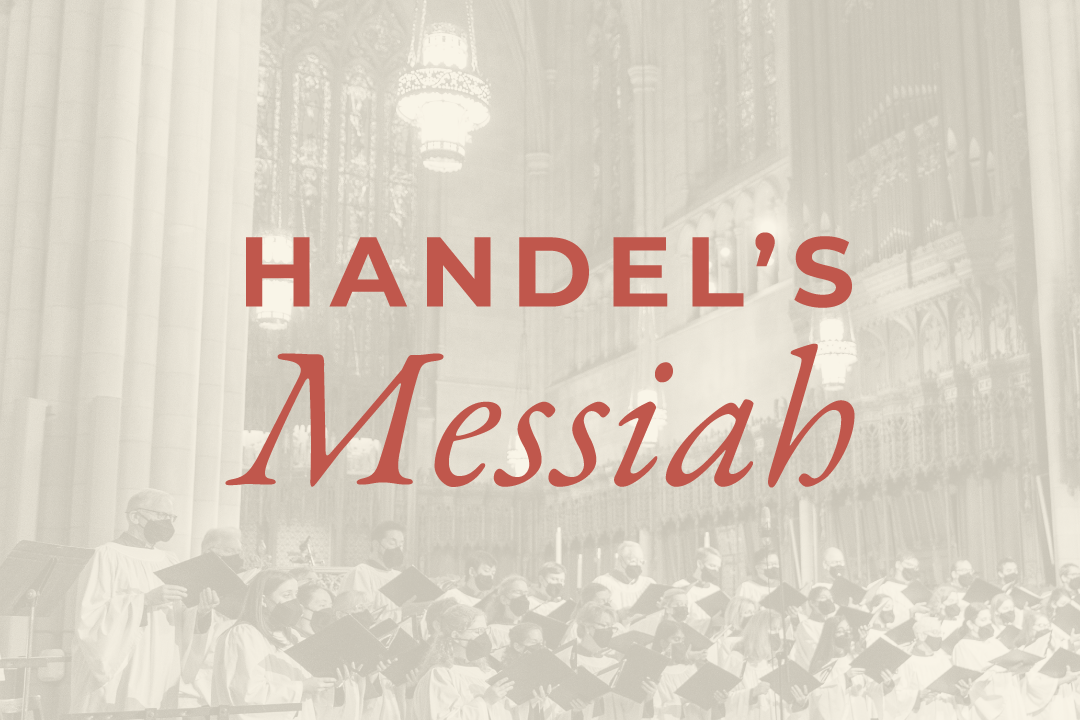 Since 1933, George Frideric Handel’s Messiah has been the fulcrum of the Chapel’s concert life and a cherished Duke holiday tradition. Handel’s masterwork traces the history of humanity’s divine redemption through Christ’s birth, death, and resurrection, in music that is both treasured and timeless.

Missa in Angustiis (“Lord Nelson” Mass) by Franz Joseph Haydn
premiere: Heal the Cracks in the Bell of the World by Zebulon M. Highben

The Chapel’s choirs are joined by the Mallarmé Chamber Players, the Durham Children’s Choir, and Chapel Carillonneur Chase Benefiel to present a program of musical responses to troubled times.

March 26: Robert Parkins, University Organist and a Professor of the Practice of Music at Duke University

Duke Chapel’s fifty-bell carillon is among the oldest and largest such instruments in the American South. Both the instrument and the recital series are named in honor of the late J. Samuel Hammond (1947–2021), University Carillonneur Emeritus, who played Duke’s carillon from 1964 until his retirement in 2018. Bring a lawn chair or blanket, and enjoy the music from the beautiful surroundings of Abele Quad. These recitals will be presented rain or shine.

Founded in 2021 by conductor, composer, and author Jason Max Ferdinand, the Jason Max Ferdinand Singers are an ensemble of professional Black musicians that performs music to unify, breathe life, and respond to societal deformities. The JMF Singers have performed to great acclaim around the United States and Canada, and in the Live from London broadcasts at the height of the Covid-19 pandemic.

Lord, Hear My Cry: An Evening of Spiritual Songs 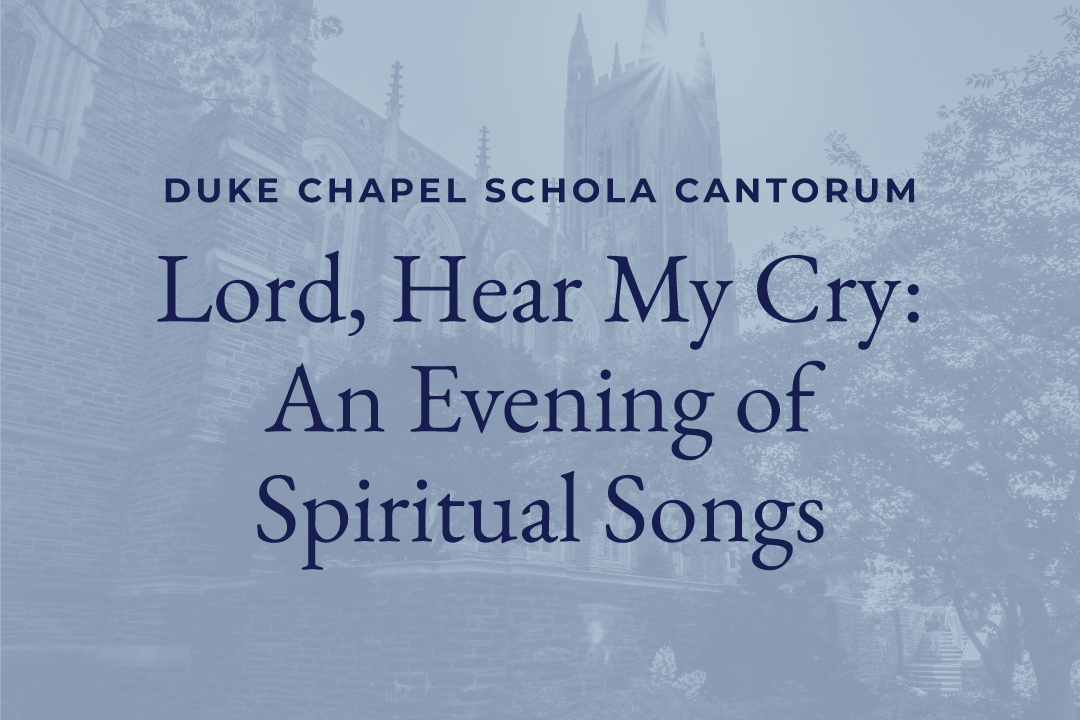 Black spirituals and German chorales are disparate genres of sacred music, separated by centuries and continents. Yet both genres share a communal orientation, and a theological concern with justice and hope. This concert will feature settings of spirituals and chorales—historical and contemporary, choral and congregational—interspersed with thematic commentary.

We celebrate the arrival of Duke Chapel’s new Bösendorfer 225 Grand Piano with this dedicatory recital, performed by pianist Cole Burger and featuring repertoire by Albéniz, Bach, Alexina Louie, and more. Burger teaches piano at Bowling Green State University and Lutheran Summer Music. He has performed, taught, and presented in the U.S., Europe, and Asia. His recording Beyond the Traveler: Piano Music by Composers from Arkansas is available from MSR Classics, and his book Keyboard Skills for the Practical Musician is available from Routledge. He holds degrees from Northwestern University and the University of Texas.

The 2022–2023 concert season at the Chapel includes further performances by theChapel’s choirs and affiliate ensembles.

Jazz Vespers services are led by Chapel and community ministers, with music provided by the John Brown Little Big Band.

We are once again grateful for the many supporters who make this season possible, including:

... and the many friends of Chapel Music who generously support our program every year. 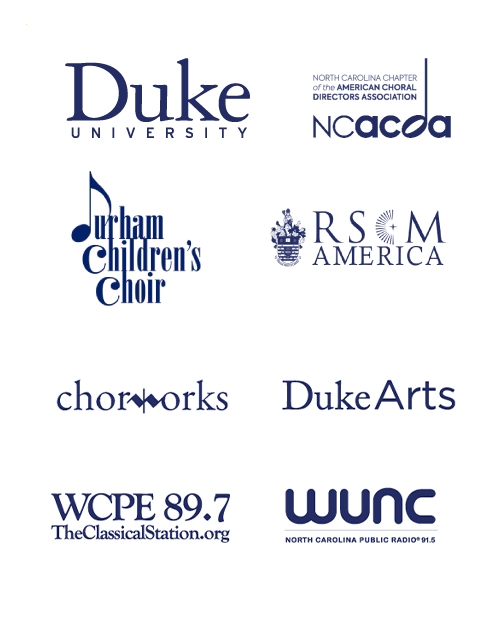