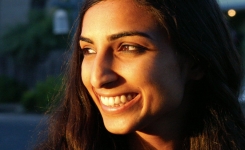 Valarie Kaur is a civil rights lawyer, award-winning filmmaker, and Sikh interfaith leader. As part of the Chapel's Finding Sanctuary speaker series, she will speak in the Divinity School's Goodson Chapel about "Women Warriors: Revolutionary Love in the Era of Enormous Rage."

Kaur is the founder of Groundswell Movement, a multi-faith online organizing community, as well as the Yale Visual Law Project, which trains law students to make films that change policy. Among other recognitions, Kaur was named one of thirteen "Progressive Faith Leaders to Watch" in 2013 by policy institute Center for American Progress, and also "Person of the Year" in 2013 by the newspaper India Abroad.

Kaur's films include Divided We Fall (2008) about hate crimes after 9/11; Alienation (2011), a short film about families swept up in immigration raids; The Worst of the Worst: Portrait of a Supermax (2012), a documentary on the practice of solitary confinement in prisons; and Oak Creek: In Memorium (2012), a viral short film on the 2012 mass shooting at the Sikh Temple of Wisconsin.

This event is free and open to the public. Parking is available in the Bryan Center Parking Garage (off Science Dr.) at a rate of $2 per hour. Photography and videography is not permitted at this event without prior permission.

More on this series at chapel.duke.edu/student-engagement/religious-life-duke/interfaith-engagement