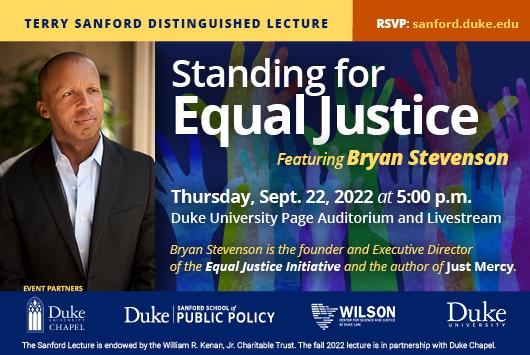 This event is being held in Page Auditorium.

The fall 2022 Terry Sanford Distinguished Lecture will feature Bryan Stevenson, the founder and Executive Director of the Equal Justice Initiative (EJI), a human rights organization in Montgomery, Ala. He is the author of the critically acclaimed New York Times bestseller, Just Mercy, which was adapted as a major motion picture.

Under Stevenson's leadership, EJI has won major legal challenges eliminating excessive and unfair sentencing, exonerating innocent death row prisoners, confronting abuse of the incarcerated and the mentally ill, and aiding children prosecuted as adults. Stevenson has argued and won multiple cases at the U.S. Supreme Court, including a 2019 ruling protecting condemned prisoners who suffer from dementia and a landmark 2012 ruling that banned mandatory life-imprisonment-without-parole sentences for all children 17 or younger. Stevenson and his staff have won reversals, relief, or release from prison for over 135 wrongly condemned prisoners on death row and won relief for hundreds of others wrongly convicted or unfairly sentenced.

Stevenson has initiated major new anti-poverty and anti-discrimination efforts that challenge inequality in America. He led the creation of two highly acclaimed cultural sites: the Legacy Museum and the National Memorial for Peace and Justice. These national landmark institutions chronicle the legacy of slavery, lynching, and racial segregation, and the connection to mass incarceration and contemporary issues of racial bias. He is a graduate of the Harvard Law School and the Harvard School of Government.

Stevenson will speak at Duke as part of the Sanford Lecture Series. Endowed by the William R. Kenan, Jr. Charitable Trust, this prestigious lecture is open to the public and the entire Duke University campus. The lecture series intends to promote engaged and enlightened leadership. The lectures are held in honor of the late Terry Sanford, a bold leader who served as North Carolina governor, U.S. senator, president of Duke University, and founder of the Sanford School of Public Policy. Duke recently celebrated 50 years of public policy in 2021-2022. Event partners include the Sanford School of Public Policy, Duke Chapel and the Wilson Center for Science and Justice at Duke Law.

NOTE: Recording of the event will not be available and recording is not permitted at the event. Livestream is available to pre-registrants via the Duke Box Office. Tickets available Aug. 30 - Duke students & Sept. 1 - public