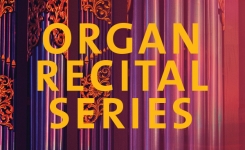 Dr. Kola Owolabi, whose playing has been described as "a thrilling combination of technical prowess and artistic ingenuity" (The American Organist), will present an eclectic program of music from the 17th through 20th centuries on the Brombaugh and Flentrop organs.

In 2002, Owolabi was awarded Second Prize, as well as the Audience Prize, at the American Guild of Organists National Young Artists Competition in Organ Performance. Previously the University Organist at Syracuse University, he is now an Associate Professor of Organ at the University of Michigan.

A staple of the Chapel Music calendar, the Organ Recital Series showcases internationally acclaimed organists performing beloved favorites, modern masterpieces, and original improvisations. The Chapel's Aeolian, Flentrop, and Brombaugh organs are all featured in this series.