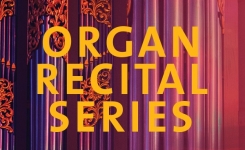 Christopher Jacobson, FRCO, Chapel Organist and Divinity School Organist at Duke, has won prizes in several organ competitions. He has presented organ recitals throughout North America, Europe, and Australia, and records for the Dutch label Pentatone. One reviewer noted that "demonstrating excellent technique and mature interpretation, Christopher Jacobson presented one of the strongest recitals of the convention" (The American Organist).

This recital will be performed on both the Flentrop and Aeolian organs and feature festive organ music for Advent and Christmas. In addition to organ masterpieces by Marcel Dupré, Johann Sebastian Bach, and Petr Eben, the program will also showcase works based on popular Christmas carols.

A staple of the Chapel Music calendar, the Organ Recital Series showcases internationally acclaimed organists performing beloved favorites, modern masterpieces, and original improvisations. The Chapel's Aeolian, Flentrop, and Brombaugh organs are all featured in this series.