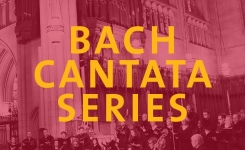 5:15 pm
Bach Cantata Series Concert #1
Location: Duke Chapel
Philip Cave, director
MISSA in G major, BWV 236 Cantata "Nun danket alle Gott," BWV 192 Johann Sebastian Bach composed only a small number of Latin works: the monumental Mass in B minor is of course well-known, but he also composed four less well-known Masses, sometimes called his "Lutheran Masses" or Missae brevis (short masses). In Luther's reformed liturgy, the vernacular held pride of place, but Latin was not completely abandoned, and elements of the Roman Catholic service remained. Unlike the great B minor Mass, which sets all the movements of the Ordinary, the short masses provided only the movements appropriate for the Lutheran service - the Kyrie and Gloria. For these settings, Bach re-used and re-purposed music from several of his cantatas: and recycling has never been more beautiful! The circumstances of the composition of Bach's Cantata No. 192, "Nun danket alle Gott" are unknown. It dates from 1730 and was possibly composed for that year's Lutheran Reformation Festival held on 31 October. This year is the 500th anniversary of Luther's historic protest and members of the audience will be invited to participate in singing the chorale on which this cantata is based. The Bach concert will last about an hour, and audience members are very welcome to join us for Choral Evensong beforehand. The service begins at 4:00pm and lasts approximately 45 minutes. Parking will be available for $5 in the Bryan Center Parking Garage. ADA parking will be in the Bryan Center Surface Lot.
Sermon Podcast Make a Gift View Events