In the tower of Duke Chapel is a fifty-bell carillon, played on weekdays at 5:00 p.m. In 2018, the carillon was named in honor of J. Samuel Hammond, university carillonneur emeritus.

The carillonneur begins the 5:00 p.m. recitals by ringing the hour on the largest bell. For holidays or other public occasions, the programs often feature selections appropriate to the day. In a tradition started during Terry Sanford’s tenure as university president, the Duke Alma Mater (“Dear Old Duke”) is played every Friday.

Listen live online to the carillon weekdays at 5:00 p.m. Eastern Time on the Chapel's Facebook page.

Watch a video of the carillon being play:

The carillon’s fifty bells encompass four chromatic octaves. The largest bell, G natural in pitch, weighs 11,200 pounds and measures 6 feet, 9 inches in diameter at the mouth; the smallest weighs 10 1/2 pounds and is 6 3/8 inches in diameter. Although the Duke carillon is not the largest such instrument, the size, number, and tonal quality of its bells make it an outstanding example.

Unlike many modern bell instruments, Duke’s carillon is played manually from a keyboard located in a small cabin directly beneath the bells. The bells do not swing, but are bolted stationary in a steel framework. Keys and pedals are connected to the bells’ clappers by an entirely mechanical system of direct cranks, roller bars, and woven steel cables. Fifty oak batons and twenty-six pedals allow sensitive musical control of the instrument. The playing room also houses a practice keyboard, with piano-like hammers that strike small internal metal bars rather than the bells. 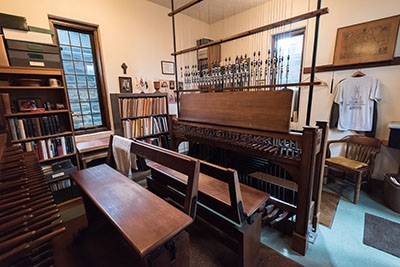 The carillon was given in honor of James B. Duke by George G. Allen and William R. Perkins, chairman and vice chairman of the Duke Endowment. It was cast in Loughborough, England by the world-reowned John Taylor Bellfounders, Ltd., which continues a line of bellfounding stretching back to the fourteenth century. The carillon was installed in 1932, and the playing mechanism was completely renovated by the same family in the summer of 1992.

The formal inaugural recital on the Chapel carillon was given in June 1932 by Anton Brees, a native of Belgium and one of America’s foremost carillonneurs, who served as university carillonneur from 1932 to 1956. Duke’s carillon was one of the first in the South, and this initial concert attracted a large audience.