As a student at Duke’s Women’s College, Amanda Smoot, WC ’63, credits Duke Chapel with enhancing her education in two ways. 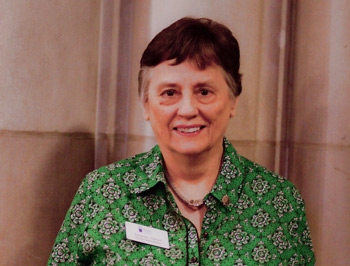 “The Chapel met both those needs and helped me grow and grow and grow,” she said in a recent phone interview from her home in Radnor, Pennsylvania.

Now an active layperson in the Episcopal Church with two seminary degrees, Smoot has held a number of leadership positions in her parish and diocese. Among many other ministries, she participated in a local interfaith dialogue group following the attacks of 9-11, is part of a team that writes prayers for services at her church, and recently took an online course on faith and racism.

It was many years after graduating that Smoot reconnected with the Chapel when she was visiting Duke for a campus ceremony and took a tour of the Chapel. Her theological education gave her a renewed appreciation for the biblical stories depicted in the Chapel’s windows. The tour led to further conversations and an invitation to join the Chapel’s advisory board.

As an advisory board member, she supports the Chapel in continuing the kind of faith formation and sacred music performance she benefited from as a student. She is also an advocate for Chapel programs that have developed since her time at Duke, especially its interfaith engagement and community ministry.

“The fact that the Duke student population has grown and diversified, meant the Chapel ministry had to grow, too, in doing ecumenical work,” she said.

During the past year, she is glad to see how the Chapel ministers found ways to connect with students even while public health protocols prevented in-person gatherings.

“The way they worked so mindfully, spiritually, with a lot of wisdom to adapt to the pandemic—that was creative and caring,” she said. “They kept reaching out and reaching out.”

Smoot is concluding her service to the advisory board but still plans to visit the Chapel to hear the preaching and sacred music that originally drew her into the Chapel community.